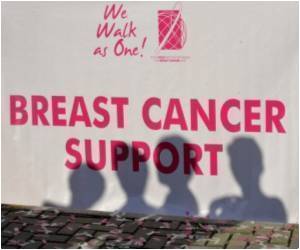 Breast cancer patients who have a strong social support system in the first year after diagnosis are less prone to die or have a recurrence of cancer, says a research.

Scientists from Vanderbilt-Ingram Cancer Center (VICC) and the Shanghai Institute of Preventive Medicine carried out the study on female breast cancer survivors in China since 2002.


The women were asked about physical issues like sleep, eating and pain, psychological well-being, social support and material well-being. The answers were converted to an overall quality of life score.

Breast cancer is one of the leading causes of cancer deaths among women. It is often said that a woman who breast-feeds is at a lower risk of developing cancer compared to another who does not .Are these mere old wives tales or is there some truth in it? This quiz on breast cancer has all the details.
Advertisement
During a median follow-up of 4.8 years after the initial quality of life assessment, the investigators documented participants who had died or been diagnosed with a cancer recurrence.

Six months after diagnosis, only greater social well-being was significantly associated with a decreased risk of dying or having a cancer recurrence.

The study was published in a recent edition of the Journal of Clinical Oncology.

Slides and animation of Breast Self Examination for early detection of breast cancer lumps in women
Advertisement
<< Robotic Surgery- Next Big Thing in Healthcare Industry
Junk Food Should Be Banned in Schools, Playgrounds: WHO >>

Indian Medical Journals The Essence of Yoga Find a Hospital Drug Interaction Checker A-Z Drug Brands in India How to Reduce School Bag Weight - Simple Tips Drug - Food Interactions Selfie Addiction Calculator Accident and Trauma Care Calculate Ideal Weight for Infants
This site uses cookies to deliver our services. By using our site, you acknowledge that you have read and understand our Cookie Policy, Privacy Policy, and our Terms of Use