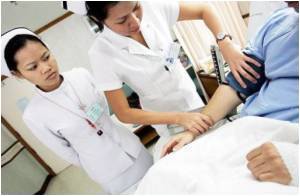 But in a new study, Damon Centola, an assistant professor at the MIT Sloan School of Management, has reached a different conclusion: Individuals are more likely to acquire new health practices while living in networks with dense clusters of connections  that is, when in close contact with people they already know well.

Researchers often regard these dense clusters of connections to be redundant when it comes to spreading information; networks featuring such clusters are considered less efficient than networks with a greater proportion of long ties. But getting people to change ingrained habits, Centola found, requires the extra reinforcement that comes from those redundancies. In other words, people need to hear a new idea multiple times before making a change.


"For about 35 years, wisdom in the social sciences has been that the more long ties there are in a network, the faster a thing will spread," says Centola. "It's startling to see that this is not always the case." Centola's paper on the subject, "The Spread of Behavior in an Online Social Network Experiment," is published in the Sept. 3 issue of the journal Science.

Adolescent depression is an ailment that occurs during the teenage characterized by persistent melancholy, disappointment and loss of self-esteem.
Advertisement
To see what difference the form of a social network makes, Centola ran a series of experiments using an Internet-based health community he developed. The 1,528 people in the study had anonymous online profiles and a series of health interests; they were matched with other participants sharing the same interests  "health buddies," as Centola calls them in the paper. Participants received e-mail updates notifying them about the activities of their health buddies.

Centola placed participants into one of two distinct kinds of networks  those oriented around long ties, and those featuring larger clusters of people  and ran six separate trials over a period of a few weeks to see which groups were more likely to register for an online health forum website offering ratings of health resources.

Overall, 54 percent of the people in clustered networks registered for the health forum, compared to 38 percent in the networks oriented around longer ties; the rate of adoption in the clustered networks was also four times as fast. Moreover, people were more likely to participate regularly in the health forum if they had more health buddies who registered for it. Only 15 percent of forum participants with one friend in the forum returned to it, but more than 30 percent of subjects with two friends returned to it, and over 40 percent with three friends in the forum made repeat visits.

"Social reinforcement from multiple health buddies made participants much more willing to adopt the behavior," notes Centola in the paper. Significantly, he writes, this effect on individuals "translates into a system-level phenomenon whereby large-scale diffusion can reach more people, and spread more quickly, in clustered networks than in random networks."

Centola thinks the existence of this effect has important implications for health officials. A "simple contagion," in network theory, can spread with a single contact; a "complex contagion" requires multiple exposures for transmission. A disease, Centola suggests, can spread as a simple contagion, but behavior that can prevent the disease  such as going to a clinic for a vaccination  might spread only as a complex contagion, thus needing to be spurred by reinforcement from multiple neighbors in a social network.

"If there is a significant difference between simple and complex contagions, that actually matters for our policy interventions," says Centola. The public promotion of screenings and other forms of disease prevention might best be aimed at communities and groups that act as closely clustered networks.

Centola thinks there is also further work to be done evaluating the effects of online social networks on behavior. "There is a natural implication in terms of what this means for designing online communities," says Centola. His new research, building on his current paper, aims to find new designs for online communities, in order to promote good health practices.