Soccer - Have the Americans Been Won Over? 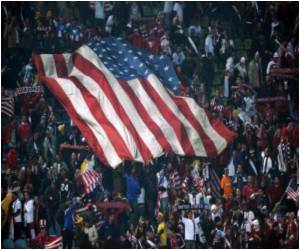 'Has America capitulated at last?' is the question being asked as an exciting victory pushed the country into the next round of the biggest sporting event in the world.

Some are seeing the ongoing World Cup as a make-or-break moment for soccer in the United States , and their squad's performance in South Africa a barometer for this country's competence in and appetite for the beautiful game.

Soccer Is A Favorable Choice Of Exercise Training For Women

Researchers say that playing soccer can help women get in better shape than just running.
Advertisement

But many experts and observers argue that soccer had been steadily gaining a fan base in America long before US hero Landon Donovan scored a stoppage time goal in a 1-0 victory over Algeria.


And the US, 14th in FIFA's rankings, has put the world on notice that it can play with the powerhouses.

Martin Vasquez, a Mexican-American footballer who played in the inaugural Major League Soccer season in 1996, and who is now the head coach for MLS team Chivas USA, said the US win over Algeria was crucial.

Exercise is about revamping your lifestyle, not just weight loss. Exercise to get healthy - that way, you'll last longer at it and get better results.
Advertisement
"It was a big day for football in the US," he told AFP.

"The coverage that the US national team has got here has been incredible."

An average of 11.1 million Americans watched English and Spanish broadcasts of the first-round matches -- 68 percent more than in 2006 -- including 17.1 million who tuned in for US-England, according to Nielsen.

Experts say coverage of the tournament by US sports broadcast giant ESPN has gone from amateurish in 2006 to top-rate this year.

Americans are used to seeing their teams and athletes win big, so a stale performance such as the one that saw USA crash out in the opening round in 2006 could have soured Americans on the sport.

But Bergmann, who blogs for Association Football, thinks the game is flourishing as a result of a "demographic reality" decades in the making.

More US kids play soccer than any other sport -- including the big three: American football, baseball and basketball -- thanks to youth leagues that took off in the 1980s, he pointed out in a phone call Thursday from South Africa, where he is blogging about the World Cup.

"The older generation that grew up without any interaction with soccer, they are moving offstage, and younger kids are now into it," Bergmann said.

But creating a devout soccer nation "isn't something you can snap your fingers about," he added. "It's a long process."

It began in earnest in the 1970s, when US soccer officials began luring global superstars like Pele and Johan Cruyff to the ultimately doomed North American Soccer League.

Prior to Donovan's thriller, the "shot hear round the world" was Paul Caligiuri's miracle strike in November 1989, which gave the US a victory over Trinidad & Tobago to make its first World Cup in 40 years.

Four years later, the United States were the hosts.

Faraway as it seems, that 1994 tournament proved vital for America's soccer standing. It sold more than 3.5 million tickets, a record which still stands, and precipitated a professional rebirth with the launch of MLS in 1996.

The 10-team league has grown to 16 today, and despite the worst recession in decades, MLS will expand to 20 teams by 2012.

It claims stars like Donovan and his LA Galaxy teammate David Beckham, and France's Thierry Henri is rumored to be making a move to MLS next season.

University of Maryland coach Sacho Cirovski has seen a steady rise in talent among American youth over the past decade, largely as a result of a comprehensive, patient approach by the US Soccer Federation.

"It's just gratifying that all the hard work at the grass level, from youth soccer to college to pros, it's all paid off," he said.

Cirovski was "careful not to make this (US-Algeria match) a seminal moment or tipping point -- it's just another positive sign."

Tell that to former US president Bill Clinton, who as honorary chairman of the bid committee to bring the tournament back to US soil sat next to FIFA chief Sepp Blatter during the US-Algeria match.

"I think they believe we're serious about it now," Sports Illustrated quoted Clinton as saying, referring to world powers like Brazil and Germany.

He was reportedly so inspired that he juggled his work schedule to be in Rustenburg Saturday to watch USA play Ghana.

Not all Americans are warming to the world's game.

Yet many signs suggest he and a merry band of soccer sourpusses are increasingly in the minority.

"It was as if every World Cup since 1994 was supposed to be the turnaround" for the US, said fan Ted Rosenbaum, 24.

Soccer - Have the Americans Been Won Over? Personalised Printable Document (PDF)