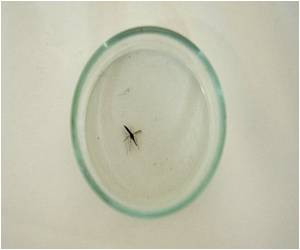 In West African bats, scientists have discovered a surprising diversity of malaria parasites. Led by scientists at the American Museum of Natural History, the Max Planck Institute for Infection Biology, and the Museum für Naturkunde, Berlin, the new study reveals that two bat-infecting parasites are closely related to parasites in rodents that are commonly used to model human malaria in laboratory studies. The results will be published this week in the Proceedings of the National Academy of Sciences.

"Bats, which are important reservoir hosts for many pathogens, particularly viruses, have been hosts to malaria parasites for more than a century," said coauthor Susan Perkins, an associate curator in the Museum's Division of Invertebrate Zoology. "Understanding the evolution of malaria parasites in bats and other animals, and how they fit into the tree of life, is key to understanding this important human disease."

Malaria is caused by a handful of species of parasites in the genus Plasmodium through the bite of mosquitos and remains a widespread vector-borne infectious disease, sickening almost half a billion people every year around the planet. Experimental research on drugs, immunology, and the development of malaria is typically done on related Plasmodium species that infect rodents, including laboratory-reared mice. The parasites' natural hosts are African thicket rats that use shrubs and trees as habitat.

Malaria is a common parasitic disease of the tropics, resulting in a million deaths every year. Early detection and adequate treatment at the right time can reduce deaths due to malaria. Test your knowledge on this condition by taking this quiz.
Advertisement
<< DNA Study Points to New Heart Drug Targets
Study Reveals Shocking Sex Facts >>