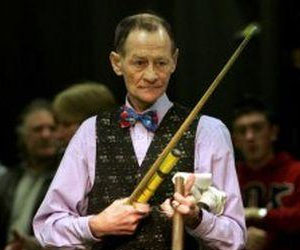 Snooker legend Alex Higgins died from malnutrition after refusing to eat, according to his friend and fellow hell raiser Jimmy White.

The former world champion was found dead at his home in Belfast, Northern Ireland on Saturday. He was 61.

Higgins was a shadow of his former self, following a lengthy battle with throat cancer.


But fellow snooker star White told the Daily Mirror, "He died from lack of nourishment. We've lost a genius and one of the greatest champions of the game."

Are you health conscious? If yes, go ahead to find out your approximate daily calorie requirement, which varies depending on the lifestyle and activities. This calculator indicates an approximate calorie requirement for a person having a normal lifestyle.
Advertisement
White claims Higgins weighed a dangerously low 84 pounds after losing his appetite and teeth through cancer treatment.

He adds, "In the end it wasn't cancer that killed him, the cancer had gone, he died from lack of nourishment, how sickening is that?

"Unfortunately Alex was his own man and he just wouldn't listen to anyone. He was a very picky eater, one sandwich a day, he never ate much," White said.

Malnutrition refers to imbalances in a persons intake of energy or nutrients and can occur due to an excess ...