Sniffing Means More Than What Meets The Eye: Research 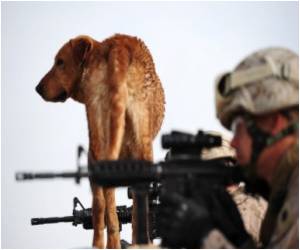 There might be more going on than you'd think when animals like dogs or rats sniff one another.

Research reported in Current Biology, a Cell Press publication, on March 7th finds in rats that those sniffing behaviors communicate information about an individual's social status. In those encounters, more dominant rats act as primary sniffers, while subordinate sniffees actually slow their breath.

"We know that rats and other animals can communicate through vocalizations, physical contact, odors, and also visual displays," says Daniel Wesson of Case Western Reserve University. "To find that there was an undiscovered form of communication these animals had been using right in front of us this whole time was truly a neat experience."


Of course, the animals do use sniffing to smell each other. But Wesson suspected that wasn't the whole story. After all, it takes very little sniffing for a dog to pick up the scent of another dog. Why, then, do they sometimes sniff one another so vigorously? And why might those sniffing exchanges lead to a fight in some cases but not others?
Advertisement
In the new study, Wesson used radio telemetry recordings of nasal respiration in rats to find that when one rat sniffs in the direction of another, the recipient of that attention will respond by slowing their own sniffing rate, as if to say "don't mind me." Further investigation showed that the direction of those interactions depended on the relative size and social status of each of the two animals. In the event that a smaller subordinate failed to lower their sniffing rate appropriately, the more dominant partner would often lash out aggressively.

Those sniffing exchanges continued even in animals unable to smell but could be eliminated by treating animals with oxytocin, a chemical sometimes referred to as the "love hormone."

Wesson says it is likely that the animals are communicating conflict avoidance and appeasement signals in their decisions to sniff or not to sniff. It's not unlike the way a male primate beats his chest to demonstrate superiority while juveniles in his presence bow down in submission.

That sniffing is used not only to collect but also to convey information highlights the complex social lives of animals. "It opens the door to a totally new line of understanding complex, microstructured social behaviors," Wesson says.

'Sniffing Techniques' of Fruit Flies can Lead to Development of New Insect Repellents
Scientists are unravelling the mechanism by which fruit flies differentiate between smells, which .....