Sniff Or Gasp to Ward Off Recurrent Syncope (Fainting) 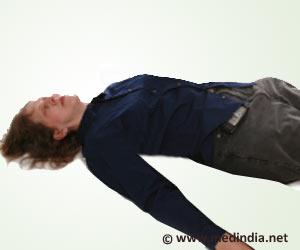 Sniffing and gasping can prevent you from fainting, claims new study. Researcher Bavolarova said that recurrent syncope (fainting) has serious effects on quality of life. Patients are often injured when they fall, which reduces their mobility and ability to look after themselves. Depression is common in these patients.

The current study focused on the most common type of fainting, called vasovagal syncope, which can be caused by prolonged standing or standing up quickly. It leads to drops in blood pressure and heart rate, and a brief loss of consciousness. Bavolarova's research explores the impact of respiratory reflexes on the cardiovascular system.

Fainting may Run in Families: Study

Fainting may be genetic and in some cases only one gene may be responsible, finds new study.
Advertisement

The current study investigated whether sniffing and gasping could prevent fainting by interrupting the falls in blood pressure and heart rate. The study included two women aged 56 and 62 years with a history of vasovagal syncope. The head up tilt test was performed on each patient. For the test, patients lie on a table which is rapidly tilted to a 60 degree angle to mimic standing up.

The State Department made an announcement on Saturday that the Secretary of State, Hillary Rodham Clinton, suffered a concussion when she fainted and struck her head.
Advertisement
"But strong and forced inhalation by sniffing or gasping seemed to prevent these drops and they did not faint. We believe that sniffing and gasping have a strong sympathetic effect that inhibits the abnormal parasympathetic activity in these patients," said Bavolarova. "This stops fainting at the highest level." She concluded that patients with recurrent fainting are advised to avoid standing up quickly and standing for long periods of time.

Those who have prodromal symptoms like weakness, sweating or visual disturbances are advised to do counter-pressure maneuvers like leg crossing and hand grips to increase their heart rate and blood pressure.