Snakes Paraded in Italy at May Day Religious Celebration 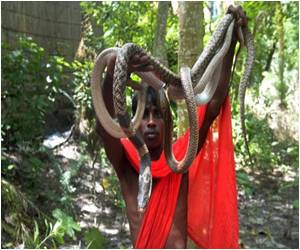 In the Italian village of Cocullo in the Apennine Mountains, dozens of snakes were paraded during a traditional May Day religious celebration.

Thirty non-venomous snakes were draped onto a statue of Saint Dominic in the yearly ritual to celebrate the saint's supposed healing powers.


The statue was then paraded around a town square packed with thousands of people, where some held up more snakes captured in the weeks preceding the rite.


The Feast of the Snake Catchers traces its origins back to pre-Christian history and celebrates the skill of those who can find the snakes after the snows melt in spring.

The reptiles -- mostly Four-Lined or Green Whip snakes -- are fattened up with a diet of live mice and eggs and are then released back into the wild after the celebration.

Centipede Eats Snake from Inside Out After Being Swallowed
As per a post mortem report conducted by a group of researchers, a centipede actually ate the snake that swallowed it from inside out.
READ MORE

Snake Bite Victim Lives by the Adage "Beer Till My Last Breath"
Media reports indicate that an Australian man lived it up with a chilled beer as his last indulgence.
READ MORE

World's First Snake Pizza
A new pizza with snake meat on it has been developed by a pizza store in Fort Myers.
READ MORE

Woman Horrified After She Finds Snake in Free Couch
A US woman was horrified after she found that she had been living with a snake for the best part of two months.
READ MORE