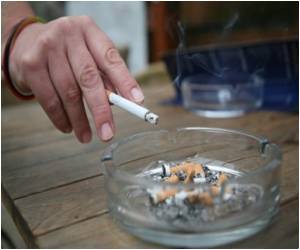 Cigarette smoking linked with the overproduction of mucus - a symptom of chronic bronchitis.

According to the study conducted by researchers in New Mexico cigarette smoke suppresses a protein that causes the natural death of mucus-producing cells in the airways of bronchitis patients.

"Although it is known that chronic mucus secretion is a hallmark of chronic bronchitis, the mechanisms underlying this condition are largely unknown," said Yohannes Tesfaigzi, director of the COPD Program at Lovelace Respiratory Research Institute in Albuquerque.


"This study shows that the airway cells that secrete mucus are sustained by cigarette smoke, which suppresses a cell death-inducing protein called Bik.

Respiratory diseases affect any part of the respiratory system. Some of the lung diseases like chronic obstructive pulmonary disease can lead to respiratory failure.
Advertisement
"Previous studies have shown overproduction of mucus cells is common in the large and small airways of cigarette smokers.

"This overproduction in the small airways is responsible for airway obstruction and reduced lung function and in the pathogenesis of acute exacerbations of COPD.

"Our previous studies show that following inflammatory responses, up to 30 percent of cells lining the airways undergo death and return to the original cell numbers," he continued. "This cell death is aided in part by proteins, including Bik. Disruption of this recovery process may lead to persistent elevation of mucus cell numbers and contribute to airway obstruction found in chronic lung diseases such as chronic bronchitis.

"Based on these earlier findings we wanted to determine if Bik may be responsible for sustained mucus cell growth in the airways of cigarette smokers," he said.

To test their hypothesis, the researchers examined both human airway tissue samples and mouse models. Human samples were derived from autopsy tissues and from bronchial brushings taken from individuals with chronic bronchitis as well as healthy controls. Chronic bronchitis was defined as a daily cough with phlegm production for 3 consecutive months, 2 years in a row.

Mice were exposed to cigarette smoke for six hours per day, five days per week for three weeks. Following exposure, lung tissue samples were collected and examined for the presence of Bik.

In another arm of the study, mice exposed to cigarette smoke were subsequently exposed to filtered air for 60 days and evaluated for Bik levels to determine whether Bik remains suppressed even after cessation of cigarette smoking.

They found mice exposed to cigarette smoke still exhibited significantly lower levels of Bik, even after being exposed to filtered air.

Acute bronchitis is a short term inflammation of the bronchi of lungs. It is usually caused by a ...