Smoking at Camp Nou may be Banned by Barcelona 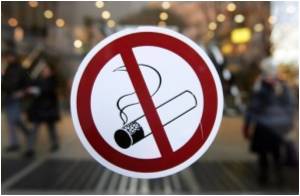 Club officials at Spanish champions Barcelona have proposed a total ban on smoking at its Camp Nou stadium.

The club will ask its members to vote on the proposal for "a smoke-free Camp Nou" at its next general assembly, said Jordi Mones, one of the club's directors.

"This is consistent with Barca's values," he told a news conference.


If Barcelona members approve the proposal, the smoking ban will come into effect next season, Barcelona president Sandro Rosell added.

Under a new anti-tobacco law which came into effect across Spain on January 2, smoking is already forbidden in indoor passageways in the Camp Nou stadium, which can seat 99,354 people.

Tobacco use in women is on the rise. The health risks of tobacco are far too many has never done a woman any good psychologically or health-wise.
Advertisement
The new law, one of the strictest in Europe, bans smoking in all enclosed public spaces, including bars, restaurants and night clubs, and makes it illegal to smoke in children's parks or anywhere on school or hospital grounds.

Barcelona said the initiative is in line with similar policies across Europe.

Dutch club Ajax and Germany's Bayer Leverkusen have banned smoking at their grounds as have all stadiums in Britain, the club said on its website.

Smoking kills the smoker silently, pushing him towards serious illnesses, which slowly lead to death.
Advertisement
<< Post-Tsunami Struggle for Japan's Pets
More on Predicting Serious Drug Side Effects Before They Oc... >>

Selfie Addiction Calculator Blood - Sugar Chart Indian Medical Journals Sanatogen Pregnancy Confirmation Calculator Drug Interaction Checker Find a Doctor The Essence of Yoga Post-Nasal Drip Daily Calorie Requirements
This site uses cookies to deliver our services. By using our site, you acknowledge that you have read and understand our Cookie Policy, Privacy Policy, and our Terms of Use