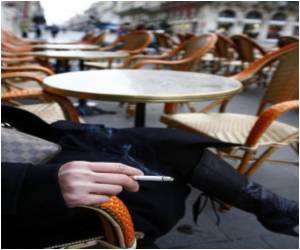 Doctors pored over a survey into smoking habits in France, Germany, Ireland and the Netherlands, both before and after bans on smoking in the workplace, restaurants and bars took effect in the last decade.

The trends in those countries were compared with Britain, which at the time did not have smoke-free legislation.


After the laws took effect, the percentage of smokers who banned all smoking at home rose by 17 percent in France, 25 percent in Ireland, 28 percent in the Netherlands and 38 percent in Germany, the study found.

Approximately half the smokers die due to smoking -related diseases. But it is not just the smokers who are at the receiving end. The passive smokers too, often pay a heavy price. If you still have not 'kicked the butt', learn more horrifying facts about smoking by participating in the following quiz.
Advertisement
The overall number of cigarettes that an individual smoked each day also fell "significantly" in Ireland, Germany and the Netherlands, but not in France.

The authors, led by Ute Mons of the German Cancer Research Centre in Heidelberg, say the findings rebut those who claimed banning smoking in public places would simply shift the habit to the home, exposing family members to dangerous second-hand smoke.

In fact, the new laws prompted many smokers to ban smoking at home, especially if they had already been mulling an intention to kick the habit, supported smoke-free legislation or had a young child exposed to passive smoke.

"Our findings strongly support the premise that smoke-free legislation does not lead to more smoking in smokers' homes," says the paper.

"The data suggest rather that smoke-free legislation may stimulate smokers to establish total smoking bans in their own home."

The research was based on responses from 4,634 smokers in the four countries and 1,080 in Britain. The British results came from across the United Kingdom except Scotland.

Tired of people asking you to stop smoking around them? Don't want to be ordered around by public smoking bans? Simple steps that help you to quit smoking.
Advertisement
<< Age-related Macular Degeneration Set to Rise a Third by 202...
Researchers Grow Brain Cells from Human Skin >>

Smoking And Tobacco
News Archive
News Resource
Advertisement
News Category
JUUL E-Cigarettes Banned from US Market Busy Americans Get The Least Sleep At 40 Years Deepika Padukone Rushed To Hospital After Sudden Chest Pain Vegans, Vegetarians and Fish Eaters Have Better Memory Than Meat Eaters How to Reduce the Risk of Acute Kidney Injury By Drinking Coffee?
More News
Sign up for Wellness Consult a Doctor Sign up for Selfcare