People with headache who use smartphones may be more likely to use more pain medication and find less relief when they do than people with headache who do not use smartphones, according to a preliminary study published in the online issue of Neurology® Clinical Practice, an official journal of the American Academy of Neurology. The study does not prove that smartphone use causes greater use of pain medication and less relief; it only shows an association.

"While these results need to be confirmed with larger and more rigorous studies, the findings are concerning, as smartphone use is growing rapidly and has been linked to a number of symptoms, with headache being the most common," said study author Deepti Vibha, DM, of All India Institute of Medical Sciences in New Delhi and a member of the American Academy of Neurology.


‘Smartphone users with regular headaches and migraines tend to take too many painkillers, but find less relief.’
Read More..


For the study, researchers identified 400 people in India with a primary headache condition, which includes migraine, tension headache and other headache types that are not due to another condition. They asked the people about their smartphone use and their headaches and medication use.

Of the 400 people, 206 were smartphone users and 194 were non-users. The people who did not use smartphones were older, had a lower education level and were more likely to have a low socioeconomic status than those who did use smartphones.

Smartphone users also reported less relief from the medication, with 84% gaining moderate or complete relief of headache pain compared to 94% of non-users.

The study did not find any difference between the two groups in how often headaches occurred, how long they lasted or how severe they were.

"The root of the problem is not yet clear," said Heidi Moawad, MD, of Case Western Reserve University in Cleveland, Ohio, and John Carroll University in University Heights, Ohio, and a member of the American Academy of Neurology, in an editorial accompanying the study.

"Is it a user's neck position? Or the phone's lighting? Or eye strain? Or the stress of being connected at all times? Answers will likely emerge in upcoming years and eventually guide strategies for more sustainable use of the devices. Features such as hands-free settings, voice activation and audio functions could potentially hold the key to helping smartphone users benefit from their phones without exacerbating their headaches."

Vibha noted that the study only examined people at one point in time; it did not follow them to look for changes over time.

Another limitation of the study was that the two groups were not matched for characteristics such as education level and socioeconomic status. Also, all information on headaches and smartphone use was provided by the participants. It is possible that they may not remember everything correctly.

Quiz on Headache
Every head has its own headache - Arab Proverb quotes Who has never suffered from a headache? Check your knowledge on how much you know about headaches. Answer the 11 questions in the quiz and find ...
READ MORE

Tips to Reduce Computer Eye Strain
Do your eyes get tired and you suffer from headache while staring at the computer screen for long hours? Here are some tips to help you resolve this issue.
READ MORE 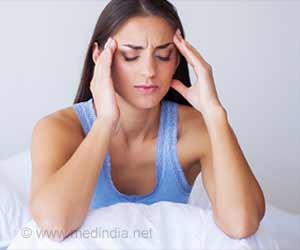 Hormonal Headaches
Headaches can occur due to several causes but normal fluctuations of the female hormones, estrogen and progesterone during the menstrual cycle and perimenopause can trigger severe hormonal headaches and migraines in women.
READ MORE