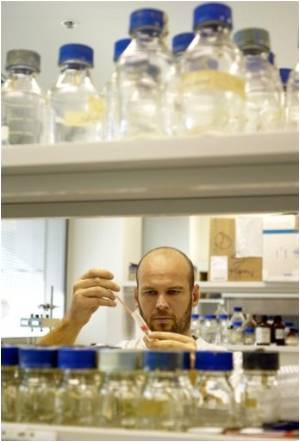 A new vaccinia virus, acting as both an oncolytic and anti-angiogenic agent, can enter and kill triple-negative breast cancer cells, finds recent study.

The findings could lead to a more targeted therapy against this deadly form of breast cancer.

According to the medical literature, TNBC is a form of breast cancer that is responsible for 10 to 20 percent of all breast cancer cases.


TNBC is most likely to occur in younger women (below 35 years old), especially if they are African American or Hispanic.

It is difficult to treat because women with TNBC lack three types of receptors-estrogen, progesterone, and HER2-that would allow them to benefit from existing hormonal and immune therapies. Although women diagnosed with TNBC, especially in later stages, do initially respond to chemotherapy, these tumours tend to be more aggressive and more likely to recur.

Breast cancer is one of the leading causes of cancer deaths among women. It is often said that a woman who breast-feeds is at a lower risk of developing cancer compared to another who does not .Are these mere old wives tales or is there some truth in it? This quiz on breast cancer has all the details.
Advertisement
"We still don't have an understanding as to why this cancer is so aggressive and tends to recur after treatment," said Sepideh Gholami, MD, lead study author and surgical resident at Stanford University Medical Center, Palo Alto, CA.

"One of the reasons I wanted to focus on TNBC is that there aren't many long-term treatment options for these patients," Gholami noted.

But oncolytic viruses, which can exploit the unique vulnerabilities of these specific cancer cells, are being intensely studied by the Yuman Fong, MD, research laboratory at MSKCC, and have shown promising results.

"The reason we used the vaccinia virus is that it is a member of the small pox family, and, as we know, small pox vaccine has been given to millions of people to eradicate small pox. So we thought it would be safer and more promising in terms of a clinical trial and actual application," Dr. Gholami said.

"Our research is an extension of previous work performed in Dr. Fong's research lab, but it looks at a new oncolytic virus that targets TNBC with a dual effect," she added.

The Clinical Congress is the first time research findings using this particular approach have been publicly presented, she said.

In this study, Dr. Gholami and her colleagues at MSKCC wanted to determine whether a new vaccinia virus, called GLV-1h164, carrying a protein that targets vascular endothelial growth factor (VEGF), could destroy TNBC tumors in a mouse animal model. TNBC has higher levels of VEGF, which can promote angiogenesis, the process by which tumors recruit blood vessels to support their growth.

"Based upon pathology, we could see that at least 60 percent of the tumors were completely regressed and the other 40 percent had very little areas of tumor cells present with a lot of necrosis, which is a sign that the tumor was responding to therapy," Dr. Gholami said.

This specific virus not only infects and breaks down cancer cells but also inhibits tumor blood vessel growth.

"We performed ultrasound imaging of the tumors and we saw a significant reduction in blood flow supplied to treated tumors with our new virus. More specifically, when we looked at the stained vasculature of the tumors, the treated tumors showed at least one half of what control mice did," Dr. Gholami reported.

These findings will allow the researchers to take the next step toward designing a clinical trial and evaluating the safety of this new virus in patients with TNBC, she concluded.

The findings were presented at the 2012 Annual Clinical Congress of the American College of Surgeons.

Slides and animation of Breast Self Examination for early detection of breast cancer lumps in women
Advertisement
<< Some Women are Pressurized into Idolizing Size-zero Models:...
Moderate Alcohol Consumption May Increase Risk of Atrial Fi... >>