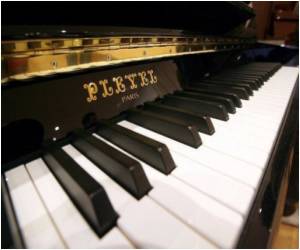 Sixty-one-year-old Uwe Kliemt jumps up from the grand piano to perform a minuet step: "See how speed masks the work's true character?" he asks the audience. "Only when I slow down, can I truly hear it. Only then does it touch me."

Night has fallen on the small Austrian ski resort of Wagrain, nestled deep in a valley ringed by mountains. The hourly toll of church bells is the only sound to disturb the silence of the moonlit night.

A new study says men who take the time to engage in cultural activities or artistic pursuits are less likely to suffer from depression.
Advertisement

Kliemt, a musicologist from Hamburg in Germany with salt and pepper beard and piercing blue eyes, is one of dozens of thinkers and businessmen gathered here for the annual meeting of the "Society for the Deceleration of Time."


For him, speed in classical music, he says, has become "a dogma to the detriment of the beauty and meaning of the original works."

And that is why, he says, he "refuses to give in to the cult of speed, which so many people associate with virtuosity in music."

Change the Face of Waste-disposal Artistically!

A Dutch engineer has suggested a simple and artistic method to dispose off major chunks of waste generated in our cities - building pyramids of trash.
Advertisement
Born 20 years ago at Austria's Klagenfurt University, the think tank now boasts 700 members in Europe, North and South America: academics and artists but also entrepreneurs, therapists, lawyers and even politicians.

All are convinced that the speeding-up of our way of life is shaping the future of mankind, and that it is urgent to turn back the clock.

Each in their own lives has worked to slow down, in order to "rethink our skewed relationship with time" and "rediscover a happy, meaningful life," says the society's chairman, Munich lawyer Erwin Heller.

"Ask the question: what will I remember two years from now of the week I have just live through, and most people will say 'nothing'," says Imre Marton Remenyi, a psychotherapist, teacher and sexologist.

"We should spend at least two hours a day doing things we really enjoy -- and that it also true for sex," he adds.

During three days in Wagrain, some 50 society members, most from Germany, Switzerland and Austria, brought their background and ideas to a high-flying debate, in between bracing walks, hearty food and stints in the sauna.

Does the cult of speed in modern-day society stem from the crises we face -- in global finance or the environment -- or are the crises themselves caused by our helter-skelter behaviour? asked Dietrich Kropfberger, a German economist.

Art is one way of getting people to slow down and think, especially in big cities, argues the Swiss sociologist Mark Riklin.

"People stop and smile. By slowing down we rediscover the details that make life beautiful."

Frithjof Bergmann, 80, a philosopher from the University of Michigan who has advised General Motors in his long career but also spent two years living as a hermit in the woods, believes it is time for "a new form of work and culture."

Smaller companies that give people a chance to determine "what they really, really want out of life."

Martin Liebmann, a businessman in his 40s who drove down from Luebeck in Germany on board a Citroen Deesse -- "a car for taking the time to enjoy life" -- is a picture of contentment.

His small marketing firm is a success, he takes pleasures in the human contacts, in choosing his clients -- and he says he has made slowing down "a state of mind."

For him, as for many of those in Wagrain, the process has spurred a more spiritual approach to life, because, says the linguist Karl Auwaerter, "without that nothing can work, whatever speed you choose."

Actor-turned-politician Arnold Schwarzenegger scoffs at the suggestion that smoking should be banned from films aimed at children.
Advertisement
Advertisement
This site uses cookies to deliver our services.By using our site, you acknowledge that you have read and understand our Cookie Policy, Privacy Policy, and our Terms of Use  Ok, Got it. Close
×