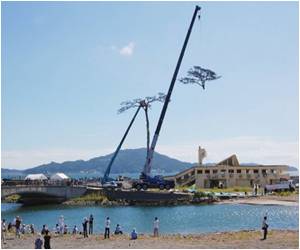 A team of researchers have shed light on the causes of the devastating tsunami that struck Japan's Tohoku region in March 2011.

A team of scientists, including McGill University geologist Christie Rowe, has published a set of studies in the journal Science shedding light on what caused the dramatic displacement of the seafloor off the northeastern coast of Japan.

The findings also suggest that other zones in the northwest Pacific may be at risk of similar huge earthquakes.


Prof. Rowe, of McGill's Department of Earth and Planetary Sciences, was one of 27 scientists from 10 countries who participated in a 50-day expedition in 2012 on the Japanese drilling vessel Chikyu.
Advertisement
The team drilled three holes in the Japan Trench area to study the rupture zone of the 2011 earthquake, a fault in the ocean floor where two of the Earth's major tectonic plates meet, deep beneath the surface of the Pacific Ocean.

The latter plate bends and plunges deep into the earth, forming the Japan Trench.

The conventional view among geologists has been that deep beneath the seafloor, where rocks are strong, movements of the plates can generate a lot of elastic rebound.

Closer to the surface of the seafloor, where rocks are softer and less compressed, this rebound effect was thought to taper off.

The results of last year's drilling by the Chikyu expedition, outlined in the Science papers published Dec. 6, reveal several factors that help account for this unexpectedly violent slip between the two tectonic plates.

The scientists also discovered that the clay deposits that fill the narrow fault are made of extremely fine sediment.

The discovery of this unusual clay in the Tohoku slip zone suggests that other subduction zones in the northwest Pacific where this type of clay is present - from Russia's Kamchatka peninsula to the Aleutian Islands - may be capable of generating similar, huge earthquakes, Rowe added.

Melting Ice Caps may be the Culprit Behind Tsunamis
Melting ice caps could be responsible for triggering tsunamis, a new study suggests...

Tsunami-proof Survival Pods in China to Defend Against 'apocalypse'
In anticipation of next week's supposed Mayan-predicted apocalypse, as people across the globe ......