Slight Shift in Attitudes Toward Bisexuals, from Negative to Neutral 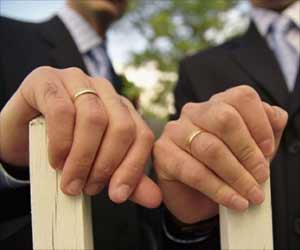 Bisexual men and women are those with the capacity for physical, romantic and/or sexual attraction to more than one sex or gender.

The US Supreme Court ruled that gay marriage is a legal right in all 50 states. US President Barack Obama praised the ruling as a victory for America.
‘While our society has seen marked shifts in more positive attitudes toward homosexuality, a new study suggests that attitudes toward bisexuality have shifted slightly from very negative to neutral.’

While positive attitudes toward gay men and lesbians have increased over recent decades, a new study led by researchers at IU's Center for Sexual Health Promotion shows attitudes toward bisexual men and women are relatively neutral, if not ambivalent.


The study, led by Brian Dodge, associate professor in the Department of Applied Health Science and associate director of the Center for Sexual Health Promotion at Indiana University's School of Public Health-Bloomington, was recently published in PLOS ONE, an open-access, peer-reviewed online journal. Dodge and his colleagues are presenting the data today at the Annual Meeting of the American Public Health Association in Denver, Colorado.

Blood donation will be open to gay men who have not been sexually active for the preceding 12 months.

The study is only the second to explore attitudes toward bisexual men and women in a nationally representative sample. It is also the first to do so with a sample of gay, lesbian and other-identified individuals (pansexual, queer and other identity labels), in addition to those who identify as heterosexuals. The nationally representative sample was taken from the Center for Sexual Health Promotion's 2015 National Survey of Sexual Health and Behavior, one wave of data from an ongoing population-based survey of adults and adolescents in the U.S.

"While recent data demonstrates dramatic shifts in attitude (from negative to positive) toward homosexuality, gay/lesbian individuals and same-sex marriage in the U.S., most of these surveys do not ask about attitudes toward bisexuality or bisexual individuals," Dodge said. "And many rely on convenience sampling strategies that are not representative of the general population of the U.S."

The study looked at five negative connotations, found in previous studies, associated with bisexual men and women, including the idea that they are confused or in transition regarding their sexual orientation, that they are hypersexual and that they are vectors of sexually transmitted diseases.

The research showed that a majority of male and female respondents, more than one-third, were most likely to "neither agree nor disagree" with the attitudinal statements. In regard to bisexual men and women having the capability to be faithful in a relationship, nearly 40% neither agreed nor disagreed.

Those who identified as "other" had the most positive attitudes toward bisexuality, followed by gay/lesbian respondents and then heterosexuals.

Bisexual men and women face a disproportionate rate of physical, mental and other health disparities in comparison to monosexuals - those who identify as exclusively heterosexual and exclusively homosexual, Dodge said. Although research has not determined the cause, Dodge said that negative attitudes and stigma associated with bisexuality could play a role.

Dodge said he hopes the results emphasize the need for efforts to decrease negative stereotypes and increase acceptance of bisexual individuals as a component of broader initiatives aimed at tolerance of sexual and gender minority individuals.

"After documenting the absence of positive attitudes toward bisexual men and women in the general U.S. population, we encourage future research, intervention and practice opportunities focused on assessing, understanding and eliminating biphobia - for example, among clinicians and other service providers - and determining how health disparities among bisexual men and women can be alleviated," he said.

After nearly a year of debates and protests across the country, French President Francois Hollande has finally signed gay marriage into law.
<< Hospital Nurse Staffing can Help Reduce Readmissions in Pos...
New Insights into Ebola Virus >>

After a heated two-week debate at the Vatican, Roman Catholic bishops approved a final document but failed to agree on opening the Church's doors to remarried divorcees and gays.

Daily Calorie Requirements Find a Doctor Turmeric Powder - Health Benefits, Uses & Side Effects Indian Medical Journals Nutam (400mg) (Piracetam) The Essence of Yoga Accident and Trauma Care Color Blindness Calculator Drug Interaction Checker Blood Donation - Recipients
This site uses cookies to deliver our services. By using our site, you acknowledge that you have read and understand our Cookie Policy, Privacy Policy, and our Terms of Use