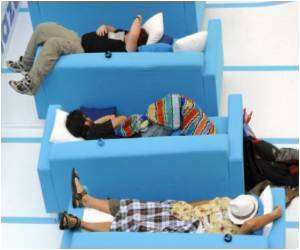 It found that the symptoms of diabetes developed after just three days of disrupted sleep, the Daily Mail reported.

The latest findings could help to explain previous research that has shown night shift workers are prone to type 2 diabetes and heart disease.


The study involving almost 20,000 participants found those with any of four particular variants of the gene were at much greater risk - offering hope of personalised treatments for the condition.

Diabetes has replaced every other condition to become the fastest growing lifestyle disease, globally. This disease also impacts children. Some people are more inclined to develop diabetes than others. Do you belong to the high- risk group? Spend 5 minutes to find out.
Advertisement
Scientists say the faulty protein, known as MT2, may disrupt the link between our 24 hour, or circadian, rhythms and release of the hormone insulin - leading to abnormal control of blood sugar and, hence, type 2 diabetes.

"Blood sugar control is one of the many processes regulated by the body's biological clock," said Professor Philippe Froguel, of Imperial College London.

"This study adds to our understanding of how the gene that carries the blueprint for a key component in the clock can influence people's risk of diabetes.

"We found very rare variants of the MT2 gene that have a much larger effect than more common variants discovered before. Although each mutation is rare, they are common in the sense that everyone has a lot of very rare mutations in their DNA.

"Cataloguing these mutations will enable us to much more accurately assess a person's risk of disease based on their genetics," he dded.

Dr Iain Frame, director of research at Diabetes UK, said: "Genetic studies like this one are useful as they can help us understand how a person's genetic makeup can influence their risk of developing type 2 diabetes.

In the study, researchers examined the MT2 gene in 7,632 people to look for more unusual variants that have a bigger effect on disease risk.

They found 40 associated with type 2 diabetes, four of which were very rare and rendered the receptor protein completely incapable of responding to the hormone melatonin.

The scientists then confirmed the link with these four mutations in an additional sample of 11,854 people.

Each mutation was analysed by testing what effect they have on the MT2 receptor in human cells in the lab.

The mutations that completely prevented the receptor from working proved to have a very big effect on diabetes risk, suggesting there is a direct link between MT2 and the disease.

"This risk is not controlled by one single gene, however, and we already know that other genetic changes, as well as lifestyle factors, can affect the likelihood of developing this complex condition," Dr Frame stated.

"The more we understand about the effect of these genetic differences, the more likely it is that we will be able to design new drugs or apply existing drug treatments for people with type 2 diabetes, but we are not yet at that stage.

"What we can be sure of now is that eating a balanced diet rich in fruit and vegetables, maintaining a healthy weight and being more physically active can help to reduce the risk of developing type 2 diabetes as well as help people with the condition to manage it more effectively, and lower the likelihood of developing serious complications," he concluded.

The latest study has been published in Nature Genetics.

How many times have you stayed awake in the dead of the night counting sheep? If it is fairly often then you could be suffering from a sleep disorder!
Advertisement
Advertisement

Circadian rhythm (also known as sleep/wake cycle or the body clock) is a biological process that follows an ...

Educating the patient, the bed partner or care taker is important for the management of Parasomnias