Slaughterhouses Use Papyrus Plant To Detox 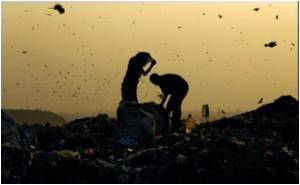 For millennia humans have used the papyrus sedge. The Ancient Egyptians wrote on it, it can be made into highly buoyant boats, it is grown for ornamentation and parts can even be eaten. Researchers in Uganda have demonstrated that growing papyrus can be used to soak up toxins and other noxious residues from abattoir effluent. The research can be found in the International Journal of Environmental Technology and Management.

Robinson Odong, Frank Kansiime, John Omara and Joseph Kyambadde of Makerere University in Kampala, Uganda, investigated a range of macrophyte plants grown in so-called experimental mesocosms to see which if any might be able to clean up waste water from slaughterhouses. They hoped the plants would absorb toxic matter from the effluent through their roots as they grow, leading to safe, biologically filtered water. They point out that abattoir effluent is a major source of pollution entering Lake Victoria. The effluent originates from two slaughterhouses located along the Nakivubo channel in Kampala discharging 700,000 liters (almost 200,000 gallons) per day of untreated effluent into the channel, which drains into Lake Victoria at Inner Murchison Bay via the Nakivubo wetlands. The wetlands do not have the ability to reduce the highly toxic COD (chemical oxygen demand) value 7 to 16 grams per liter) of the water to make it non-polluting to the waterways and Lake Victoria.


The researchers tested Cyperus papyrus, the papyrus sedge, Typha domingensis, a type of bulrush or cattail found throughout temperate parts of the world and mangrove ecosystems in particular, Miscanthidium violaceum, a sub-tropical grass, and Phragmites mauritianus, a common reed species.
Advertisement
None of the unplanted mesocosms used as control experiments had any effect on water quality whereas papyrus was able to remove nitrogen and phosphorus ions as well as residues of organic matter present in the waste water. Papyrus was able to absorb almost 4 grams of phosphorus per kilogram of dry weight from the waste water. It increased its mass to 31.0 kilograms of dry weight per square meter through absorption of nutrients from the water through its vast root network, which has a surface area of well over 200 square feet (more than 200,000 square centimeters) in an area of growing papyrus covering just one square foot (about 1000 centimeter square).

These promising results suggest that an inexpensive and ecologically sound way to treat slaughterhouse wastewaters can be found in which constructed wetlands growing an abundance of papyrus sedge as a final treatment step could greatly reduce the amount of untreated effluent reaching Lake Victoria. "The Government of Uganda and relevant agencies such as the National Environment Management Authority (NEMA) should encourage proprietors of agrobased industries to take advantage of the potential of C. papyrus in the treatment of their wastewaters," the team concludes.

Gabon's Village Communities Imprisoned by Papyrus Plants
Papyrus reeds in Gabon's Lake Anengue cut off villages around it from access to the outside world .....

Waste Heat from Cities Affect Atmospheric Systems
A new study shows the extent to which human activities are influencing the atmosphere....

Essential Foods for a Healthy Detox
Detoxification is an essential mechanism to keep your body healthy. Read on to know more about the b...