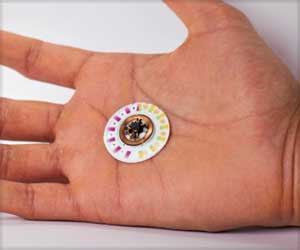 A skin patch has been developed by a group of international scientists that detects information about the inner body by testing the components of sweat. The biomarker sensor operates without batteries. The description of the device and how it works is given in the journal Science Advances.

Many biomarkers that are increasingly popular these days such as Fitbit, but are bulky and measures only mechanical activities. But, the new device is light in weight and can measure information about biological processes in real time.

Advertisement
‘The lightweight patch-like device is comfortable to wear on skin, requires no batteries and can quickly generate information about the functioning of the body in no real time.’

Once the patch is attached to the skin, the device contains tiny holes that pull in sweat. The sweat moves to these tiny collection chambers, passing through micro-channels. Each chamber is an individual testing site. One tests the pH of the sweat by color changes. The other chamber tests how much sweat is produced and the next one contains chemical reagents that react with glucose or lactate.


What do these biomarkers signify?

The researchers indicate that elements in the sweat contain markers that denote cystic fibrosis, dehydration and electrolyte levels. The device would also help athletes to check how their bodies are functioning during competition.
Advertisement
How does the device operate?

The components of the skin patch get its power from radio waves emitted from nearby electronic devices such as smartphones. Smartphones can read the data from the device using near-field communication technology and can convert it into a form that is easily understandable by the users and doctors.

The versatility of the skin patch

Despite devices that are strapped to the body, a patch format of the new device is considered more comfortable. The device could be worn in any environment, which even works in underwater. Therefore, the skin patch can monitor biological activities in different individuals specific to different conditions. Researchers also state that the channel portion of the device is disposable and the piece could be used multiple times and is cost-effective.

Skin Disorder
Skin types can range from oily to dry, extreme dryness accompanied by rashes and itching can often ....