Skin Cancer Treatments can be Applied for Other Cancers Using Nanoparticles 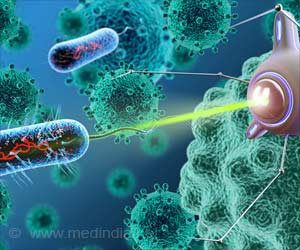 The study was conducted at the INRS (Institut national de la recherche scientifique) professors Fiorenzo Vetrone and Federico Rosei, in collaboration with an international research team. Their results have been published in an article featured on the cover of the 26th edition of the Royal Society of Chemistry journal Chemical Science.

Advertisement
‘The nanocapsules encompass various nanoparticles along with therapeutic or diagnostic agents, which are stronger and more effective. This will help in MRI or CT imaging guided therapy and controlled drug release for other form of cancers.’
Read More..

Photodynamic therapies, referred to as PDT, are treatments that use visible light to destroy cancerous or precancerous cells. Abnormal tissue is brought into contact with a light-activated and light-sensitive medication before it is exposed to light, triggering a chemical reaction that releases reactive oxygen species (ROS) to attack the diseased cells. In current treatments, the medication is injected into unhealthy tissue. But injection only works if tumors are on or under the skin, such as skin cancers.


The research team found a way around the limitation, so phototherapies can be used to treat other types of cancers as well. Thanks to silica nanoparticles doctors can use near-infrared (NIR) light, which penetrates further down into the tissue. The nanoparticles convert NIR light into visible light, triggering a chemical reaction and releasing ROS. "It's like we've reinforced the capsule that transports the treatment for diseased cells and increased the versatility of PDT. This nano superhero is stronger and more effective, even inside the body," explained Professor Vetrone, referring to the cover illustration depicting the team's discovery.
Advertisement
Developed by a team of chemists, magnetic resonance imaging (MRI) experts, and an oncologist, the new way of selectively enveloping light-sensitive medication in a nanocapsule could be beneficial for diagnosis and treatment. "Eventually, nanocapsules will help us expand the scope of application," added the professor.

Next, the team plans to test the nanoparticles in an in-vivo setting.

Cancers of the Ear / Ear Cancers
Skin cancer is the most common type of ear cancer. Cancer of the ear canal can be cured if limited ....

Merkel Cell Carcinoma
Merkel cell carcinoma is a rare and a highly aggressive primary skin cancer that grows rapidly and ....