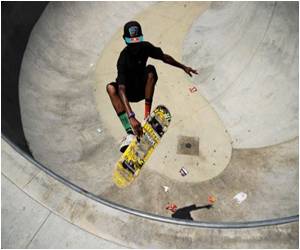 An annual skateboard race which had been due to run the length of Manhattan and draw up to 2,000 riders was banned by a New York judge.

The Broadway Bomb, as the event is known, started with a few dozen people in 2002 and last year saw 1,000 participants, riding colorful longboards down Broadway into New York's financial district.

The Broadway Bomb Facebook page showed just under 2,000 people signed up by Friday.


However, late Thursday, the New York State Supreme Court issued a restraining order to stop the race after the city complained that it causes traffic mayhem and danger both to riders and the public at large.

Students from a US university have created the world's lightest vehicle - an electric skateboard that is capable of reaching speeds of 20mph.
Advertisement
Organizer Ian Nichols posted on the Facebook page that "in order to avoid being prosecuted, Ian Nichols must officially cancel the Broadway Bomb and relinquish all responsibility."

However, in a defiant note, the message said "we are going to flash mob" and "start the race."

States in US Legislating Against Saggy Pants

Several counties in the US are finalising proposals to ban saggy pants. In one small Louisiana town violation could invite six months in jail and a $500 fine.
Advertisement
<< Children With Autism can Identify Misbehavior but Have Trou...
Babies Born To HIV Mothers More Likely To Succumb To Measle... >>

Xenophobia
News Archive
News Resource
News Category
Five Love Languages Every Couple Should Know Go for a Walk to Speed Up Your Brain Function 5 Types of Tea Women Should Drink Daily Bodychecking Experience Does Not Protect Teen Hockey Players from Injury Yoga: A Powerful Weapon to Fight COVID-19
More News
Sign up for Wellness Consult a Doctor Sign up for Selfcare