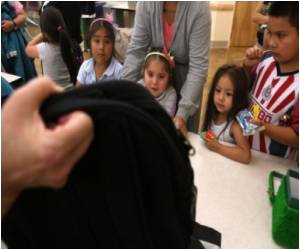 A new study has found that children as young as six have been hospitalised after suffering the effects of anorexia and other eating disorders in the UK and Ireland.

Researchers from University College London's Institute of Child Health discovered a shocking 208 cases of 'early onset' eating disorders among the under-13s in a 14-month study period, reports the Daily Mail.

And found that more girls than boys suffered from disordered eating, with 82 per cent avoiding food compared with only 18 per cent of boys suffering the same symptoms.


Experts are calling for 'urgent action' to improve the detection of eating disorders in the young after the research revealed for the first time the extent of anorexia and bulimia among under-13s.

The term ''Bulimia'' refers to episodes of uncontrolled excessive eating, known as "binges," followed by self-induced vomiting or purgation.
Advertisement
"Our study gives the first estimate of the incidence of early-onset eating disorders in UK and Irish children," said Lead researcher Dasha Nicholls, a consultant child and adolescent psychiatrist.

About three in every 100,000 children under 13 in the UK and Ireland has some sort of eating disorder, according to the study.

The UCL's Institute of Child Health carried out the research using more than 3,000 contacts, including hospital, university and community consultant paediatricians and psychiatrists.

They found some 37 per cent of young children were suffering from anorexia, around one per cent had bulimia or were over-eaters (although this is thought to be an underestimate) and 43 per cent had another eating disorder.

The remaining 19 per cent had symptoms of disordered eating, such as avoiding food, but were not preoccupied with their weight or shape.

Overall, 96 per cent of children avoided food while 84 per cent were said to have a 'morbid preoccupation with food'.

Almost three quarters feared gaining weight, 67 per cent were preoccupied with their weight, half with their body shape and 43 per cent with excessive exercising.

Some children used laxatives, made themselves sick or were binge-eaters, the study found.

The study found that likelihood of having an eating disorder increased with age and that there were no cases found among five-year-olds.

The study found that half of the children needed to be admitted to hospital. One year into the study, 73 per cent had improved, six per cent were worse and 10 per cent were unchanged.

The study was published in the British Journal of Psychiatry.

Are you a Health Food Junkie? Are you obsessed with what you eat all the time? You may be a victim of a condition called Orthorexia Nervosa.
Advertisement
<< AIDS at Moment of Truth
Insulin Has the Potential to Fight Alzheimer's: New Study >>

Do you binge-eat secretly most of the time? Or do you feel so guilty after eating that you badly want to self-induce vomiting and get the food out. Check out if you are a victim of eating disorder.
Advertisement
News A-Z
A B C D E F G H I J K L M N O P Q R S T U V W X Y Z
What's New on Medindia

News Archive
News Resource
News Category
New Tool Predicts Antibody Resistance Among Kids With Kawasaki Disease Bon Voyage: 10 Necessary Things to Carry While Traveling With a Baby Sleep Quality in Children is Tied to Behavioral Development: Here's How Brain Markers of ADHD in Children Identified Children's Access to Health Care Suffers When a Parent is Jailed
More News
Sign up for Wellness Consult a Doctor Sign up for Selfcare