Sitting in Front of TV for Long Hours is Bad for Your Heart: Heres Why

Sitting and watching TV for hours can increase the risk of heart disease and early death, reports a new study. The findings of the study are published in the Journal of the American Heart Association.

Sitting for long periods of time has been linked to increased risk of cardiovascular disease and early death, but a new study suggests that not all types of sitting are equally unhealthy.


The study, led by researchers at Columbia University Vagelos College of Physicians and Surgeons, found that leisure-time sitting (while watching TV)--but not sitting at work--was associated with a greater risk of heart disease and death among the study's more than 3,500 participants. The study also found that moderate-to-vigorous exercise may reduce or eliminate the harmful effects of sedentary television watching.


‘Too much sitting and TV watching can put you at a higher risk of developing heart disease. So, make sure to move more and beat your television addiction to boost your heart health.’
Read More..


"Our findings show that how you spend your time outside of work may matter more when it comes to heart health," study author Keith M. Diaz, Ph.D., assistant professor of behavioral medicine at Columbia University Vagelos College of Physicians and Surgeons and a certified exercise physiologist. "Even if you have a job that requires you to sit for long periods of time, replacing the time you spend sitting at home with strenuous exercise could reduce your risk of heart disease and death."

A growing body of research shows that people who are sedentary--especially those who sit for long, uninterrupted periods of time--have a higher risk of cardiovascular disease and death.

But most previous studies did not follow people over time, making it difficult to draw conclusions about the relationship between sedentary behavior and health risk. These studies have included mainly people of European descent rather than African Americans, a group that has a higher risk of heart disease compared with whites. Previous studies also measured physical activity using an activity monitor, which is unable to distinguish between different types of sedentary behavior.

What the Study Found?

The participants who had logged the most TV-viewing hours (4 or more hours a day) had a 50% greater risk of cardiovascular events and death compared to those who watched the least amount of TV (less than 2 hours a day).

Even for the most dedicated TV watchers, moderate to vigorous physical activity--such as walking briskly or doing aerobic exercise--reduced the risk of heart attacks, stroke, or death. No increased risk of heart attack, stroke, or death was seen in people who watched TV for 4 or more hours a day and engaged in 150 minutes or more of exercise a week.

Why Does the Type of Sitting Matter?

In a previous study, Diaz found that excessive sitting is linked to worse health outcomes, and even more so when sitting occurs in lengthy, uninterrupted bouts.

"It may be that most people tend to watch television for hours without moving, while most workers get up from their desk frequently," Diaz says. "The combination of eating a large meal such as dinner and then sitting for hours could also be particularly harmful."

"More research is needed, but it's possible that just taking a short break from your TV time and going for a walk may be enough to offset the harm of leisure-time sitting," adds Diaz. "Almost any type of exercise that gets you breathing harder, and your heart beating faster may be beneficial."

And although occupational sitting was less problematic, Diaz notes that the same approach to movement applies at work. "We recognize that it isn't easy for some workers, like truck drivers, to take breaks from sitting, but everyone else should make a regular habit of getting up from their desks. For those who can't, our findings show that what you do outside of work may be what really counts."

The research team suspect that the study's findings may be applicable to anyone who is sedentary, even though the study focused on African Americans.

Watching TV for Too Long Increases Risk For Blood Clot In Vein
Watching TV for prolonged duration can increase the risk of venous thromboembolism or blood clots in veins of the legs, arms, pelvis and lungs.
READ MORE 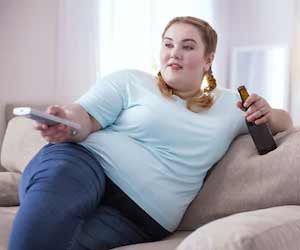 Too Much Sitting Kills Nearly 50,000 People Every Year in the UK
Are you sitting too much? Spending too much time sitting down causes nearly 50,000 deaths in the UK each year, reveals a new study.
READ MORE