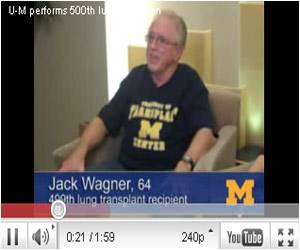 The University of Michigan Transplant Center preformed its 500th lung transplant. But there is more information than this record number. Both recipients were saved from a single organ donor.

U-M surgeons performed both transplant No. 499 and No. 500 almost simultaneously on Jan. 3. No. 499 is Jack Wagner, a 64-year-old from Brighton, Mich. No. 500 is Dan Roy, a 64-year-old from Brownstown Township, Mich. Both men had Idiopathic Pulmonary Fibrosis (IPF). A diagnosis of IPF is not much better than a death sentence: there is no treatment and the survival rate is less than three years. Roy's older brother died of the same disease before he could get a transplant.

The two men actually ran into each other as they rushed to University Hospital after getting the call that a lung was available.Seeing each other's oxygen tanks, they asked each other what brought them to the hospital. Roy said he was getting a new left lung. Surprised, Wagner replied he was getting a right lung. Thanks to the Michigan resident who donated those lungs, Roy and Wagner will be able to watch their grandchildren grow up, enjoy their retirement years with family and avoid becoming housebound with a debilitating disease.

We were both elated. We haven't come down from that high,says Roy. The two men have since found out they share many things in common they are both Vietnam veterans and retirees from the auto industry. Both are 64, had three children and have been married more than 40 years.The whole family knew this disease was a death sentence, and I was not destined to see my grandchildren grow up. The gift of this lung, this second chance at life, was enormous. People tell me we've got our old Dan back.


Jules Lin, M.D., assistant professor of thoracic surgery at U-M, did the 500th lung transplant for Roy on Jan. 3. The surgery itself was like others we've done, but it is remarkable that 500 have been done here. For me, it's rewarding to be a part of that, says Lin. Lung transplant patients have good survival rates and can often return to the activities they loved. Both Wagner and Roy were already very dependent on oxygen and as the disease progressed rapidly, getting close to becoming home bound. Both were facing setting aside an active lifestyle in fact Wagner routinely played softball and had gone to see his doctor about a shoulder injury when he found out he had IPF.

Bilateral Lung Transplantation Increases Longevity Than the Single One

Patients with end-stage chronic obstructive pulmonary disease (COPD) who have two lungs transplanted in place of one live nearly two years longer on average, according to a study released Friday.
Advertisement
The diagnosis shook me to the core. I exercised a lot and never thought this would happen to me, says Wagner, who adds that his good physical condition did help him qualify for the transplant and survive the procedure. U-M transplants more lungs than any other hospital in Michigan. The program has been around since 1990. About 1,500 lungs are transplanted annually each year, and U-M ranks among the top third of lung transplant programs based on the number of operations.Â

Just improving a person's life and allowing them to have a productive life again being able to eat, sleep and live without thinking of their lung disease it's very rewarding. It's a great story to highlight the tremendous need for organ donation, says Kevin Chan, M.D., U-M's Medical Director of Lung Transplantation. Chan stressed the important role of the donor's family members, whose generosity in a time of tragedy allowed others a second chance at life.

"The thanks really shouldn't go to us, but more to the family of the person who passed who made it possible to save another person's life. They are the true "heroes" of this story, Chan says.Every year, 30,000 Americans die from IPF, a disease that often affects older people. Its cause generally is unknown, although cumulative injuries like exposure to environmental toxins and pollutants in genetically susceptible individuals could contribute to causing fibrosis.

There is a gradual scarring of the lung, thickening and contracting the organ until it loses its ability to exchange oxygen with blood. Patients experience extreme fatigue, rapid weight loss, chronic cough and shortness of breath. There are 5 million people worldwide that are affected by this disease, according to the Pulmonary Fibrosis Foundation. In the United States there are more than 100,000 patients with pulmonary fibrosis.

Both Wagner and Roy waited only about a month before they received the new lungs. At U-M, the waiting period for lungs is about seven months on average. Every day, 19 people die while waiting for an organ transplant and another 138 people are added to the national waiting list. More than 100,000 people are on that waiting list enough to fill Michigan Stadium where the Wolverines play football.

I think organ donation is a very simple gift that anyone can make. And the more people that do it, the more people who can have this better lease on life, says Rishindra M. Reddy, M.D., assistant professor of surgery at U-M, and the thoracic surgeon who performed Wagner's transplant. Both Wagner and Roy thanked Gift of Life Michigan and the donor for the gift of a second chance. That donor helped out tremendously, allowing two people or more to carry on their lives a lot longer than 64 years of age. We're hoping it is 84, 94 years of age, Wagner says.

A study in the July 7 issue of JAMA says that there is significant variation among lung transplant centers in the U.S. in the 5-year survival rate of patients
Advertisement
Advertisement
This site uses cookies to deliver our services.By using our site, you acknowledge that you have read and understand our Cookie Policy, Privacy Policy, and our Terms of Use  Ok, Got it. Close
×