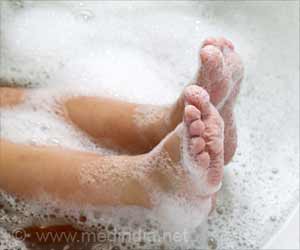 Sand fleas are parasites that burrow into a person's skin, causing extreme pain, itching, and severe infection. Hence, following a few preventive measures can help reduce the severity of sand flea disease (tungiasis) in many children.

Tungiasis affects millions of people in South America, the Caribbean, and sub-Saharan Africa. The sand fleas responsible for tungiasis rapidly grow once in a human host, causing immense itching, inflammation, pain, and debilitation. There are currently no good treatment methods available in affected areas, and people often use non-sterile methods to attempt to remove the fleas themselves, causing more damage. Awareness of tungiasis has been growing in East Africa in recent years, but data on epidemiological characteristics are scarce.


In the new work, a group of scientists from KEMRI-Wellcome Trust Research Programme, Kenya, the International Centre of Insect Physiology and Ecology (icipe), Charité University of Medicine, Berlin and Dabaso Tujengane Kenya, examined the feet of 1,829 students of all age groups from 5 schools in coastal Kenya. In one subset of participants, observations were repeated after a school holiday. Structured interviews were conducted with 707 students to get data on household infrastructure, behavior and socio-economic status.
Advertisement
The overall prevalence of tungiasis was 48 percent, with boys between the ages of 10 and 14 years most at risk and factors related to socio-economic status positively associated with disease risk. Children returned from their school holiday with higher rates of infection. The data suggested that mild to moderate tungiasis could be reduced by a third, and severe tungiasis by more than half, if homes had sealed floors, while roughly a seventh of the cases could be prevented by sealing classroom floors and another fifth by using soap for daily feet washing.

"Observations from our study suggest that up to 70 percent of tungiasis cases may be prevented through simple prevention methods," Dr. Lynne Elson the lead author says, "There is a clear role for public health workers to expand the WASH policy to include washing of feet with soap in school-aged children to fight tungiasis and to raise awareness of the importance of sealed floors."

Source: Eurekalert
Advertisement
<< Is Getting Sick in the Morning Different From Getting Sick a...
Wearable Cooling and Heating Patch Could Serve as Personal T... >>

Fungal Foot Infection Linked to Waring Loafers Without Socks
New research says that the growing trend of wearing loafers without socks is leading to foot fungal ...

Sand Flea Disease May Develop into a Life-threatening Condition: Here's How
Sand flea disease (also called Tungiasis) is an inflammatory skin disease caused by the penetration ...