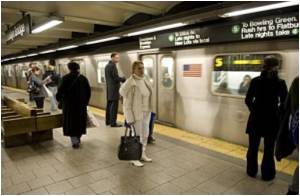 It might be a great idea to travel by metro instead of your car, for it helps serve two important purposes - you can skip the traffic jam as well as stay fit by knocking off six pounds a year, reveals a recent research into the benefits of using public transportation.

According to Telegraph, a study published in the August issue of the American Journal of Preventive Medicine by researchers from the University of Pennsylvania, Drexel University and the RAND Corporation, found that construction of a light-rail system (LRT) resulted in increased physical activity (walking) and subsequent weight loss by people served by the LRT.

"An added benefit of public policy investments in LRT, on top of the general transportation benefits accrued, is the potential reductions in obesity in the population, " the paper quoted lead author Dr MacDonald, as saying in his study.


The new research based on two surveys, one collecting data prior to the completion of an LRT in Charlotte, North Carolina, the second after completion, found that using light rail for commuting was associated with reductions in 'Body Mass Index' (BMI) over time.

This is equivalent to a relative weight loss of 6.45 lbs for a person who is 5'5. LRT users were also 81 per cent less likely to become obese over time, the study revealed.

Paris's 'Ghost' Metro Stations Become Centre of Attraction for Tourists
Haxo, one of several "ghost" metro stations in Paris, was built in 1900 but rarely used. Like the .....

US Subways Contribute To Higher Noise Levels
While the U.S. mass transit system is considered to be one of the safest modes of travel that ......

Scientists Debunk Notion That All Public Transport Is 'Green'
You worry a lot about the environment and do everything you can to reduce your carbon footprint -- ....