Simple Steps and Patience Could Help Treat Bedwetting in Kids

Patience on the part of parents, along with some simple steps, can help cure nighttime bedwetting, or primary nocturnal enuresis, among kids.

While most of the children outgrow this condition, others continue wetting the bed up to the age of 6-7 years, which could eventually raise social and psychological issues.

The condition happens more often in boys than in girls, and tends to run in families.


Dr. Paul Austin, associate professor of surgery at Washington University in St. Louis and a paediatric urologist at St. Louis Children's Hospital, said that bedwetting is not due to a behavioural or mental problem or laziness of the child.

Bedwetting (nocturnal enuresis) is involuntary voiding of urine during sleep at least three times a week in a child aged 5 years or older.
Advertisement
Instead, some of the most common causes of bedwetting include genetic factors, lack of anti-diuretic hormone (ADH) or vasopressin, which is produced normally at night to limit the formation of urine during sleep.

Nighttime bed-wetting could also be caused when a full bladder fails to communicate with the brain to wake up the child or the bladder is too small for his or her age.

Usually, all these common causes are temporary, and resolve as the child matures.

Parents should exercise patience with their child, and understand that their child is not wetting the bed on purpose.

Austin said that the parents should also encourage the child and let him or her know that they will eventually be able to stay dry at night.

Parents should make sure the child gets enough rest and doesn't get overtired, they should also avoid foods before bed that may cause sensitivity or increase urine production, such as dairy, carbonated drinks, caffeine, chocolate, artificially coloured drinks, candy, licorice, citrus and melons.

But if the problem pursues, treatment is recommended, which is tailored for each child.

Behaviour modification techniques, such as a bedwetting or moisture alarm, can help when arousal is a strong component for the cause of bedwetting.

When the bladder appears to be small, another medication to help the bladder relax and hold more urine may be used or combined with the antidiuretic hormone medication.

"Children who take medication for the condition can take a break from the medication after six months. Within a week or two, families can quickly determine whether the child has outgrown the problem. If not, medication is prescribed for another six-month cycle. Over time, the bedwetting will eventually stop," said Austin.

Nocturia (Waking up to Pee at Night)

Stress Incontinence - Management
News Archive
News Resource
Advertisement
News Category
How Does Disordered Eating Develop in Kids? Go Green: Living Near Green Spaces can Boost Your Child's Lung Health How Maternal Antibodies can Protect Babies from Cytomegalovirus? How to Determine Whether Culture Influences Children or Not? Do Parents Worry Too Much about Children's Screen Time?
More News
Sign up for Wellness Consult a Doctor Sign up for Selfcare

Speak to an Expert on Bedwetting 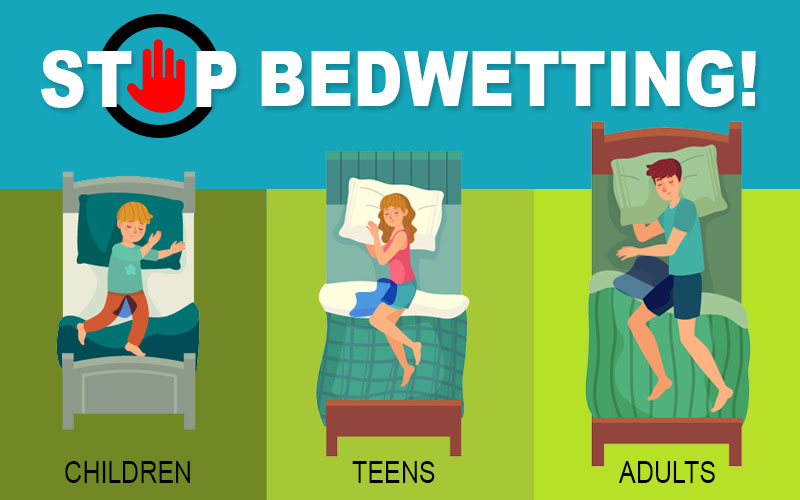