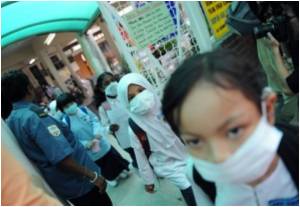 A simple new method to better assess the risks posed by emerging zoonotic viruses, those transmissible from animals to humans, has emerged from a study published in PLOS Medicine this week.

Dr. Simon Cauchemez and colleagues from Imperial College London in the UK and the Centers for Disease Control and Prevention in the US show that the new tool can produce transmissibility estimates for swine flu (the H3N2v-M virus), allowing researchers to better evaluate the possible pandemic threat posed by this virus. Until now, estimates of transmissibility were derived from detailed outbreak investigations, which are resource intensive and subject to selection bias. In this study, the authors develop a method to derive unbiased estimates of transmissibility with more limited data.


The researchers developed a mathematical model of disease transmission, which only requires data from routine surveillance and standard case investigations. They showed that the pandemic potential of a zoonotic virus could be estimated simply from the proportion of cases infected by the natural reservoir. The authors then applied their new approach to assess the human-to-human transmissibility of H1N1v, H1N2v and H3N2v viruses (in particular that of the H3N2v-M virus) from US surveillance data for the period December 2005 to December 2011 and Nipah virus in Malaysia and Bangladesh, as well as to a non-zoonotic pathogen Vibrio cholerae in the Dominican Republic. This study demonstrates the applicability of this novel approach to estimating the reproduction number R (or the number of individuals infected by a case), during zoonotic and certain non-zoonotic outbreaks.
Advertisement
The technique for estimating R described in this paper is simple and robust and does not require as much investigative effort as existing methods, say the authors. However, a key limitation of this new approach is that it is designed to estimate R during subcritical outbreaks. If it is not a subcritical outbreak, other methods are needed to estimate R.

Dr. Lyn Finelli, Surveillance and Outbreak Response Team (Influenza Division, CDC) and co-author on the paper said: "Outbreaks of the H3N2v-M virus largely took place at livestock exhibitions with thousands of visitors every day. It is very hard to perform detailed outbreak investigations and effectively trace cases in such settings since visitors are widely dispersed. The approach presented in the paper, is simple, requires few data, and was very useful in assessing transmissibility of the virus from the data available."