Experts have found that a simple hearing test may now allow doctors to identify which newborns are at a risk for the perplexing Sudden Infant Death Syndrome (SIDS).

The study, conducted by Dr. Daniel D. Rubens of Children's Hospital and Regional Medical Center in Seattle, looked at 31 babies in a Rhode Island study group who died from SIDS.

It found that all the children shared the same characteristics in the results of their newborn hearing test for the right ear. Children who did not share those characteristics did not die from SIDS.


Doctors hope that this might finally help them find out which children are at risk for SIDS, considered the largest killer of young infants.

"This discovery opens a whole new line of inquiry into SIDS research. For the first time, it's now possible that with a simple, standard hearing test babies could be identified as at risk for SIDS, allowing preventative measures to be implemented in advance of a tragic event," said Rubens.

SIDS usually strikes children between two- and four-months-old, and tends to strike boys more than girls. It's blamed for the deaths of one-in-1,000 newborns each year around the world.

Death occurs during sleep, seemingly with no warning and no previous symptoms. Changes in infant care have been promoted including the "Back to Sleep" program discouraging sleeping on the stomach, and avoiding exposure to cigarette smoke. Various causes have been suggested, including disturbances in respiratory control and infant overheating, but to date nothing has proven conclusive.

Rubens proposes that vestibular hair cells in the inner ear are important in transmitting information to the brain regarding carbon dioxide levels in the blood. He suggests that injury to these cells will upset respiratory control, playing a critical role in determining which infants might suffer from SIDS.

The infants Rubens studied who died of SIDS showed a consistent lower score in their standard newborn hearing tests than babies that didn't die from SIDS. Additionally, healthy infants typically test stronger in the right ear than the left. However, in each of the SIDS cases studied, the right ear tested lower than the left.

Rubens said that more research is still needed on the subject, insisting, "we must now fully explore all aspects of inner ear function and SIDS, and analyze testing frequencies higher than those currently tested by newborn hearing screen centers."

Risk of SIDS Reduced by the Use of Baby Dummies: Research
The night-time use of babies dummies halves the risk of cot death, the biggest cause of death among babies in Britain over one month old, according to research published Thursday.
READ MORE

Audiometry
Audiometry or the hearing test helps to determine the ability of a person to hear various sounds and consequently identify the location of damage in a person with diminished hearing sensitivity.
READ MORE 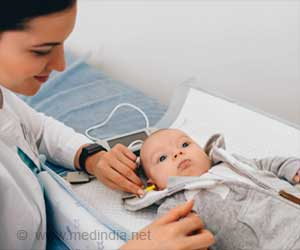