Simple blood test could be used as a clinical biomarker to identify patients who are more likely to develop heart disease.

Scientists at Newcastle University have revealed how a simple blood test could be used to help identify cardiovascular aging and the risk of heart disease.

For the first time, experts led by Professor Konstantinos Stellos report that higher levels of amyloid-beta in the blood may be a key indicator of cardiovascular disease.


‘Simple blood test could be used to help identify cardiovascular aging and the risk of heart disease. This could ultimately cut down the number of heart disease deaths.’
Read More..


It is hoped that this research will one day lead to the development of a simple blood test that could be used as a clinical biomarker to identify patients who are most at risk, so that preventative measures can be put in place and death rates reduced.

Amyloid-beta is known to be involved in the development of Alzheimer's disease, yet scientists have now concluded that it may have a key role to play in vascular stiffening, thickening of the arteries, heart failure and heart disease progression.

The work, published in the Journal of the American College of Cardiology, proposes the existence of a common link between both conditions, which has not been acknowledged before, and could lead to better patient care.

Professor Stellos, from Newcastle University's Biosciences Institute, UK, who also works as a consultant cardiologist at Newcastle Hospitals NHS Foundation Trust, led a series of international studies over the last few years, which involved experts from countries such as Greece, Germany, Switzerland and the USA.

He said: "Our work has created and put all the pieces of the puzzle together. For the first time, we have provided evidence of the involvement of amyloid-beta in early and later stages of cardiovascular disease.

"What is really exciting is that we were able to reproduce these unexpected, clinically meaningful findings in patients from around the world. In all cases, we observed that amyloid-beta is a biomarker of cardiovascular aging and of cardiovascular disease prognosis."

Cardiovascular disease is the number one cause of death around the world, taking almost 18 million lives each year. It includes coronary heart disease, heart attack, heart failure and other conditions.

Professor Stellos' Group, in collaboration with several international scientists, analysed blood samples from more than 6,600 patients from multiple cohort studies in nine countries, and found that patients could be divided into high and low risk categories of heart disease based on their amyloid-beta levels.

In the future, it is hoped that a simple blood test could be added to the current method of patient screening, known as the GRACE score, which assesses heart attack risk and guides patients' treatment plans.

Further research at Newcastle University will focus on clinical trials to establish the use of a bedside blood test in predicting risk of heart attack and/or death and look at the most effective ways to reduce amyloid-beta in the blood.

Professor Stellos said: "I am interested in knowing which of my patients is at risk of death and/or recurrent heart attacks.

"Measuring amyloid-beta reclassified a large proportion of patients who had a heart attack in the correct risk categories over an established guideline-suggested risk score in independent clinical studies.

"If blood-based amyloid-beta predicts death in patients with heart disease, does it make a therapeutic target? Our next step is to investigate this." 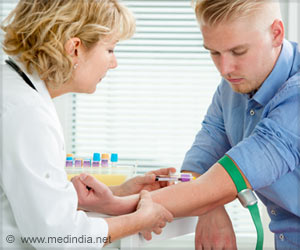