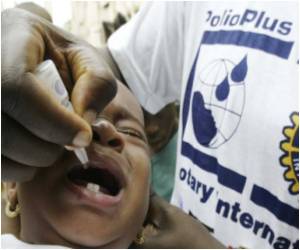 Sierra Leone has launched a four-day polio vaccination campaign that targets around 1.3 million children under the age of five.

Over 70,000 health workers and community volunteers were combing the streets and jungle paths in Sierra Leone Friday at the start of a vaccination program dubbed "Kick polio out of Sierra Leone" targeting young children in the West African country.

Nurse Selina Joseph said she was taking part in the exercise for the first time and remarked on the women's desire to protect their children from the crippling disease.


"The area I am assigned to is generally regarded as a hard-to-reach hilly slope but by the time we reached level ground, there were women, some with babies strapped to their backs and others with three to four frightened children sitting or standing on perched rocks waiting for us to administer the doses. It was all like going to an excursion," she said.

Global polio eradication programs have significantly cut the incidence of the disease, yet it is an apt time to take stock of what remains to be done to 'Stop Polio Forever'.
Advertisement
The health ministry's program manager, Dr Thomas Samba, who is coordinating the initiative told AFP: "The vaccination exercise in Sierra Leone is being undertaken simultaneously with eight other ECOWAS states - Guinea, Liberia, Nigeria, Niger, Cote d'Ivoire, Ghana, Burkina Faso and Mali."

On the current state of the disease in Sierra Leone, Samba said, "It is good news that new cases of polio have not been found over the last two years but we are not relenting as new cases are being recorded in other countries in the West African sub-region."

"It is of great concern when polio becomes a threat as a child plagued by polio is a loss to the nation," he said.

Samba noted that the last episode of polio in Sierra Leone occurred in February 2010 involving about 12 confirmed cases.

According to health ministry records, the Geneva-based Gavi Alliance, an organization which distributes vaccines to the world's poorest countries, has committed 24 million dollars from March 2009 to the immunization program in Sierra Leone.