Health Minister of Sierra Leone, Soccoh Kabia, said on Thursday that Medical and aid official in the country are preparing for an anticipated outbreak of Lassa fever. The disease claims about 200 lives every year.

The viral infection "is endemic over this period in the eastern district of the country", including the third largest city, Kenema, and the outlying towns of Tongo Field and Panguma in the diamond mining belt, Kabia said.

"We are studying the current situation and compiling reports on a possible outbreak as between January and February, the disease is at its peak with the preparation of farming activities," the minister told AFP in an interview.


He explained that when farmers were clearing and burning the brush, "the bush rats who carry the virus take cover in residential homes," then "people come in contact with the virus through excreta and urine of the bush rats and in some cases, people feed on these rats and are then exposed to the complications."

Preventive measures taken include the establishment of a remedial centre in Kenema, with aid from the UN World Health Organisation (WHO), the UN Children's Fund (UNICEF) and World Food Programme and a British non-governmental organisation, Merlin.

"It is a disease to take seriously because of its high rate of mortality," Kabia warned. "If it is not acted on, 90 percent of unborn babies as well as suckling and pregnant women will be at risk."

The disease, which causes fever, headache, difficulty in swallowing and can lead to infection of vital organs and death, is named for a village in Nigeria where it was identified.

An opposition member of parliament from Kenema, Francis Konuwa, said the district "is a Lassa fever belt. Poor water facilities as well as the unavailability of trained and qualified health officers have worsened the situation. We drink water from the same source where rats also drink."

Before Sierra Leone was ravaged by a brutal 1991-2001 civil war, the average lifespan of Sierra Leoneans was about 45 years. The enormity of public health problems is largely considered accountable for such a short life expenctancy, the WHO assessment said.

Evaluation of Headache - Introduction
Many controversies exist regarding the nomenclature and classification of headache. International Headache Society (IHS) developed and published a classification and diagnostic criteria in 1988.
READ MORE 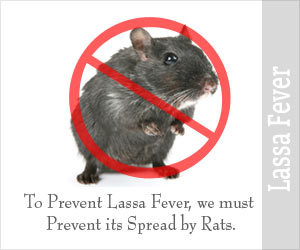