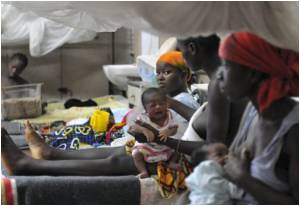 In order to contain the cholera epidemic in Sierra Leone, the biggest in decades which has claimed 271 lives so far, the Red Cross has sought for urgent need for more funds.

"Although the cholera numbers are now stabilising ... this is not the time to pull back," said Amanda McClelland, an emergency health advisor for the International Federation of Red Cross and Red Crescent Societies (IFRC).

Speaking to reporters in Geneva, she cautioned that the cases were still spreading in districts and distant villages, down towards the Liberian border.


As of September 17, 18,919 cases had been reported across the country since the beginning of the year, with 273 deaths confirmed, according to the World Health Organisation's coordinator for the control of epidemic diseases, William Augusto Perea Caro.

Cholera, as we know, is an infectious disease caused by the bacterium Vibrio cholerae. The mode of transmission of the disease is by consuming contaminated water.
Advertisement
"It is the largest epidemic we have had of cholera in Africa this year," he told the Geneva news conference.

Whereas the disease usually appears at the start of the rainy season in June or July, this year cases were reported at the beginning of the year and have spread rapidly in the densely-populated capital Freetown.

On a positive note, the epidemic seemed to be winding down in Freetown and in the hard-hit coastal areas, Caro said, pointing out that there now were only about 100 cases reported each week, compared to more than 2,000 a week at the beginning of August.

But the disease was continuing to spread in the south and southwest of the country, he warned.

The Red Cross said it had deployed more than 700 volunteers "to work with communities at risk and provide cholera awareness and hygiene promotion activities."

"Nobody should be dying of cholera. Cholera is the easiest disease to treat... You are not supposed to die," Caro lamented.

McClelland agreed, pointing out that "this is a completely preventable disease."

"We knew this was coming. We knew there was cholera increasing since February," she said complaining that not enough attention had been paid so far at halting the epidemic.

The IFRC said the funds requested Thursday would be enough to help more than 3.5 million people directly or indirectly affected by the outbreak over the next six months.

In contrast to the WHO recommendations, some researchers advocate the use of antibiotics in moderate as well as severe cases of cholera.
Advertisement
<< Secondhand Smoke Linked To 42,000 Deaths in US
Global Warming can Intensify Tropical Rainfall: Reports >>

Daily Calorie Requirements The Essence of Yoga Sanatogen Vent Forte (Theophylline) Blood - Sugar Chart Post-Nasal Drip How to Reduce School Bag Weight - Simple Tips Blood Pressure Calculator Hearing Loss Calculator Find a Doctor
This site uses cookies to deliver our services. By using our site, you acknowledge that you have read and understand our Cookie Policy, Privacy Policy, and our Terms of Use