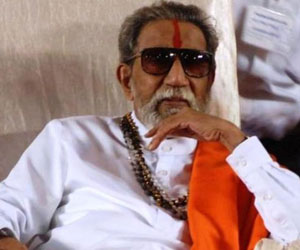 "Thackeray is serious, but stable. A team of doctors is continuously monitoring him," a party official, who met him in the evening, told IANS, preferring anonymity.

There were reports that the 86-year-old leader had been put on a ventilator, but party officials denied them.


Two days ago, Thackeray, in a personalised edit in Saamna, the party mouthpiece, had declared that his health was poor, but he was not put on ventilator, as claimed by a section of the media.

The Sena chief's nephew Raj Thackeray visited him in the afternoon at 'Matoshri', the clan's home in Mumbai's Bandra east.

Experts urge for a "constitutional moment in lieu of reducing the risk of potential global environmental disaster comparable in scale and importance to the reform of international governance.

Color Blindness Calculator Selfie Addiction Calculator Blood - Sugar Chart Find a Doctor Find a Hospital Vent Forte (Theophylline) Sanatogen How to Reduce School Bag Weight - Simple Tips Hearing Loss Calculator Indian Medical Journals
This site uses cookies to deliver our services. By using our site, you acknowledge that you have read and understand our Cookie Policy, Privacy Policy, and our Terms of Use