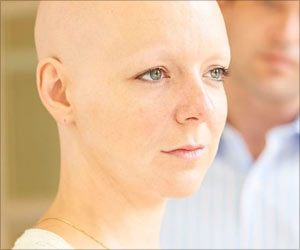 In the upcoming BBC drama, actress Sheridan Smith plays Lisa Lynch, who inspired many with her blog, before dying of cancer in March 2013 at the age of 33.

Lisa started a blog detailing her battle with cancer after she was diagnosed in 2008. The blog was very popular; it was made into a book called "C Word".
Advertisement

After a year of intensive treatment, Lisa was told that her mammogram was clear and she prepared to get on with her life, cancer-free. In 2011, the cancer returned and it was terminal. In October 2012, Lisa was told the cancer had spread to her brain and she had months to live. Lisa died just five months later.


Lisa had asked Sheridan to play her in the TV film about her book, "C Word' with a Twitter message several years ago.

Sheridan who shaved for the role said, "It did upset me a little bit at the time, but its just hair - it'll grow back. And 'The C Word' is about such an amazing woman. Everyone is affected by cancer and I lost my eldest brother to it, so although of course you feel like you've lost a bit of your femininity, I feel it's the least I could do. And actually, shaving my head has been liberating. I know I'll never do it again, so I can enjoy all the different styles it'll go through before I'm back to being me."

Source: Medindia
Advertisement
<< IvWatch: A Technology That Detects Leakage Of IV Fuid Outsid...
Parents Who Refuse to Vaccinate Children Will be Denied Gove... >>

Angelina Jolie Unknowingly Wrote Her Breast Cancer Story in 1999
It's unfortunate that much of Jolie's fictional tale called 'Skins', which she wrote in 1999 as a .....

Mutation in Gene PIK3CA May Not be the Major Cause of Breast Cancer
In breast cancer patients, mutation in the gene PIK3CA is the second most prevalent gene mutation, ....

Majority of Breast Cancer Patients Over 65 Use Hormone Treatment
In women over 65 with non-metastatic breast cancer, one of the most comprehensive looks at the use ....