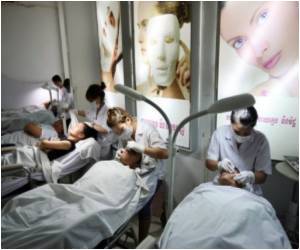 Teenage girls with severe acne are twice as likely to think about committing suicide, and boys three times as likely, compared with counterparts with clear skin, a study published on Thursday says.

The investigation, based on a questionnaire among 3,775 Norwegian youngsters aged 18-19, gives statistical evidence to back anecdotes about the toll that acne inflicts on mental health.

Acne vulgaris, popularly known as 'pimples' or 'zits' is a skin condition affecting most teenagers.
Advertisement

Fourteen percent of the respondents rated their acne as substantial.


In addition to "suicidal ideation" -- contemplating suicide at times, but not necessarily carrying it out -- they were more than twice as likely to lack friends, 51 percent likelier never to have had sex and 41 percent likelier to do poorly at school.

The study, published in the Journal of Investigative Dermatology, was led by Jon Anders Halvorsen of the University of Oslo.

Hidradenitis suppurativa (HS) or Acne Inversa is severe form of chronic acne of the sweat glands which ...

The lesions in rashes vary from small skin discolorations to large fluid-filled bullae.

Skin diseases also known as dermatologic disorders are many in number and so are their causes. The common ...

Suicide is an act of ending one's own life and it usually results from emotional isolations and inability to ...

Living with acne can be tough, but not anymore. Here we bring you the 10 best ways to deal with acne. ...
This site uses cookies to deliver our services.By using our site, you acknowledge that you have read and understand our Cookie Policy, Privacy Policy, and our Terms of Use  Ok, Got it. Close
×