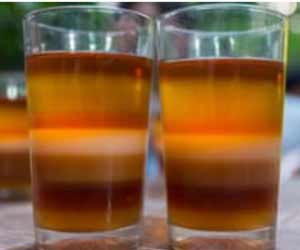 A unique seven-color tea, offering various flavors in a glass, is now available in the Bangladesh capital Dhaka.

About a decade ago, a tea vendor, Romesh Ram Gour, in northeastern Moulvibazar district, which is known as the tea capital of Bangladesh, developed the technique of layering different colored layers of tea in a glass. Each layer differs in color and taste, reports Xinhua news agency.


Tea connoisseurs in Dhaka used to travel hours to Srimongol town, about 200 km from Dhaka, just to take a sip of the legendary tea at the store of Gour who always makes his concoction away from prying eyes.


‘Romesh Ram Gour developed the technique of layering different colored layers of tea in a glass. Saiful Islam is one of the successful imitators who later opened a tea store in Dhaka which is now a hot tourist attraction.’


He never unlocked the secret to his rainbow brew that he invented, but several copycats from the region succeeded in creating seven-layer teas, which made Gour famous home and abroad.

At Islam's tea store, a cup of seven-layer drink costs about one US dollar whereas the average price of a cup of tea in the country is about 10 takas ($0.12).

Like Gour, Islam doesn't want to reveal the secret of making the seven-layer tea and doesn't allow anyone to stay at his tea-preparation room.

He said about ten years ago, a tea vendor in Moulvibazar's Srimangal area developed the technique of making such tea.

"From there I have somehow acquired the secret technique of layering seven colored tea," he added.

"Later I moved to Dhaka and opened a store to sell the seven-color tea."

He said the most interesting thing is that different layers are separate and not mixed together.

"We mix different types of locally and China-grown tea three black teas and one green tea with milk and various spices. Each mixture has a distinct color and taste, and I pour one on top of another to create seven distinct bands of colors including orange, black, white, strawberry, milk and green.

"The taste of each layer is different. It is organic. No chemical is used."

Islam said he created a white layer blended with ginger, which is especially good for health.

"There are four types of tea in my store. I have two shops. This one is for customers who are interested in the seven-layer tea."

Joyita, a student of Dhaka Polytechnic Institute, is used to taking tea at Islam's store regularly with her friends.

Another tea drinker, Dipu, said each sip of the seven-color tea delivers a different taste. "We choose this shop whenever we want to chat for a while and drink tea."