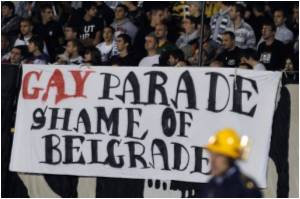 Serbian sentiments about gays have polarized sharply in the last two years with increasing negative and positive attitudes, according to a recent poll.

According to Lazar Pavlovic, acting president of the Gay Straight Alliance, the "marked polarisation" is due to a new anti-discrimination law passed in parliament in 2009 and last year's failed attempts to organise a gay pride parade.

A new study has said that gay men, lesbians, bisexuals, and heterosexuals who have ever had a same-sex sex partner are one-and-a-half to two times as likely to experience violent events
Advertisement

"There are less and less people who don't have an opinion on gays. Negative opinions are rising but positive opinions also," he told AFP.


The poll of 1,405 respondents from all over Serbia in March this year showed that 56 percent of Serbs considered homosexuality a danger to society, up from 50 percent in a 2008 survey. Another 53 percent agreed that state institutions should work on suppressing homosexuality.

A government official said that Serbia may ban political groups uttering threats against others, such as ultranationalists whose vociferous opposition led to canceling a gay rights march.
Advertisement
A Belgrade gay pride parade was called off last September after police and government officials said they could not ensure participants' security because of ultra-nationalist groups' threats.

Though the Serbian parliament pushed through a bill banning discrimination against homosexuals amid strong opposition from nationalists and religious leaders, gays are still blocked from marrying, adopting children and other legal rights enjoyed by heterosexuals.

Anti-gay sentiment still run deep in Serbian society and openly gay people are confronted with discrimination on a regular basis.