Septic Patients to be Treated With Hypothermia

Researchers at the University of Brest, France say that inducing mild hypothermia is easy to implement in clinical practice and may be a valuable tool in the treatment of human sepsis patients.

Sepsis is an inflammatory response to infection and will often result in septic shock, which is the biggest cause of death in intensive care units.


New research shows that the development of sepsis in rats living under hypothermic conditions was slower than in normal conditions and they survived much longer.


The research is presented on Thursday 1st July at the Society for Experimental Biology Annual Meeting in Prague.

The new research showed that rats with sepsis living under normal conditions (38 ºC) showed a decreased ability to carry oxygen via the blood from the lungs to vital organs around the body, compared to those living under mildly hypothermic conditions (34 ºC).

Hypothermia could have a beneficial effect in septic patients whose uptake of oxygen has been affected by the condition, by increasing the ability of the pigment in red-blood cells (haemoglobin, Hb) to carry oxygen, thus balancing the harmful effects of sepsis, say the researchers.

Under normal conditions, sepsis can lead to septic shock, causing multiple organ dysfunction and death in 60% of cases.

Building on these results, the research team are carrying out a pilot clinical study into the efficiency, safety and practicality of using mild hypothermia as a treatment for septic shock in humans.

The pilot study is being carried out Professor Erwan L'Her from Brest hospital and colleagues from the ORPHY laboratory in the University of Brest.

"The preliminary results suggest that mild hypothermia is safe and easily induced in septic shock patients and no serious adverse effects were observed", explained Karelle Leon, who is carrying out the research.

Hypothermia is already frequently induced in human patients in hospital to protect the brain from further damage after an injury has been sustained. 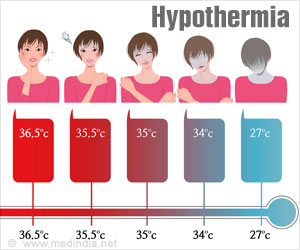