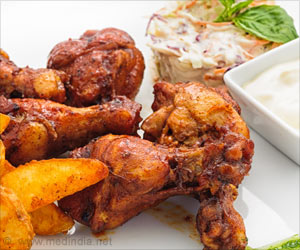 Concession stands at school sporting events are often overlooked by those advocating for healthy school food. However, a new study highlights how concession stands can benefit from adding on healthy items.

Some Asian-Americans are Predisposed to Crave for Unhealthy Food

A gene, called DRD2 A1 is linked to a lower density of dopamine receptors in the brain. Some people overeat to compensate for reduced dopamine signaling.
Advertisement
‘Many students purchase healthier foods when they are available and the revenue also increases when a variety of healthy items are available.’

"We found that an average of 77% of students purchased healthier foods when they were available and that revenue also increased when a variety of healthy items were available" says co-author Brian Wansink, Professor and Director of the Cornell Food and Brand Lab, "This a game changer for both schools and healthier students."

People who see themselves in the mirror while eating unhealthy food find it less tasty compared to those who do not see themselves in the mirror while eating.
Advertisement
"While these findings were positive," says co-author Helena Laroche of the University of Iowa, "We really wanted to know how students felt about the change, so we conducted a follow-up survey to gauge their satisfaction."

314 students responded to the survey, which asked them to indicate whether the availability of healthy foods was important to them or not. The researchers split the survey responses based on the students' answer to this question and found that both groups purchased healthier foods and were more satisfied with the offerings.

Among those who valued the availability of healthy items, 79% reported purchasing at least one new healthy item. Of those who did not believe it was important to offer healthy foods, almost as many 76% reported purchasing at least one healthy item during the school year. Furthermore, the latter group indicated being more satisfied with the variety of foods offered and the former more satisfied with the healthfulness and taste.

The researchers stress the importance of sending students a consistent message that health is important by offering healthy items wherever food is offered or sold. "Selling healthy foods at concession stands turns out to be a win-win," says co-author David Just of Cornell University, "Students are more satisfied and the bottom line improves."

Unhealthy Foods and Drinks Portrayed in a Positive Light

A new research has found that unhealthy foods and drinks which are common in kid's TV programmes, are frequently portrayed in a positive light
Advertisement
<< Visualizing the Movement of Immunotherapy Cells as They Hun...
Ultraviolet Protectiveness of a Beach Umbrella and SPF 100 ... >>

Find out why someone in a bad mood chooses to eat junk food and someone in a good mood goes for healthier food choices.