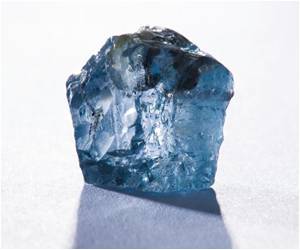 The largest in its category, a spectacular blue diamond was auctioned at a total of $23.79 million (17.35 million euros) at a Christie's auction in Geneva.

The sale of the 13.22 carat rock known simply as "The Blue" came on Wednesday, a day after Sotheby's sold a 100-carat flawless yellow diamond for $16.3 million -- with both sales including commission.

When the world's largest orange diamond went under the hammer last November at Christie's in Geneva, it raked in $35.5 million.


Such marquee sales underline the growing popularity of coloured diamonds. Once considered a curiosity, they are rarer than white diamonds and now attract higher prices per carat than even the most flawless, translucent stone.
Advertisement
The US jeweler Harry Winston bought the blue diamond, described by Christie's as the largest fancy vivid blue diamond in the world, from an anonymous seller.

"Fancy vivid" is the top rating for coloured diamonds.

The company plans to rename the 13.22-carat pear-shaped rock the "Winston Blue".

13.22 Carat 'The Blue' Diamond Set to Fetch 21 Million Dollars at Auction
The Blue, the world's largest flawless fancy vivid blue diamond is set to go under hammer next ......

Yellow Diamond Fetches $16 Mln at Auction in Geneva
An auction in Geneva on Tuesday recorded a sale of a 100 carat yellow diamond for 14.5 million ......

Diamond Heists Put Cannes on Alert
After a spate of increasingly audacious thefts highlighted the ease with which jewel thieves can ......

Diamonds: Computer's Best Friends?
An information can flow through a diamond wire in a much efficient way and could make computers ......