Clad in ornate headgear and a black robe, Tay Kim Huat wielded a mock sword and mimicked the pose of a Taoist deity's statue perched on the altar in front of him.

Swaying back and forth with his eyes closed as devotees sang prayers over him at the An Ren Gong Temple, the car parts delivery man appeared oblivious to the chants and incense smoke -- as well as his wife and children waiting outside.

A Mayan elder has insisted that the year 2012 will not bring the end of the world, despite claims that a Mayan calendar shows that time will run out on December 21 of that year.
Advertisement 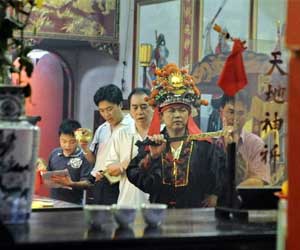 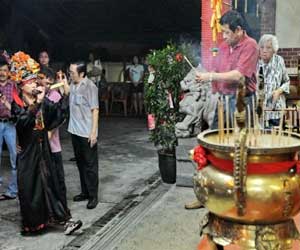 A worshipper (R) leads "dangkee" Tay Kim Huat (L), who is possessed by his god Fa Zhu Gong, back to the temple 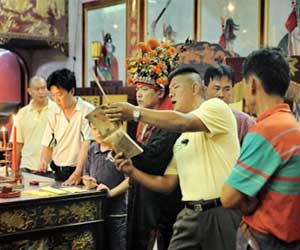 They're used to it. After all, being a "dangkee" or medium runs in the family.


"My dad was a dangkee, and so was my grandfather," said Tay, 49, who is continuing the legacy together with his brother Tay Kim Sing, 41, a wharf storeman.

Even The Dead 'Unable to Rest in Peace' in Singapore

Wong Shun Feng says he has seen spirits, been afflicted by supernatural phenomena and taken advice from gods -- and that it's all just part of the job.
Advertisement
Dangkees say they allow deities to possess their bodies to perform rituals and dispense advice to other Taoist believers.

"It is like falling asleep, I don't know anything that is going on," Tay said.

In affluent and technologically advanced Singapore, belief in spirituality persists and traditional religious practices are considered essential to good luck and prosperity, whether it involves health, love, a job or the lottery.

Government estimates place the number of active Taoist mediums at 1,000, with the actual number likely to be higher because the practice is unregulated.

Dangkees have generated renewed public attention in recent weeks after coroners ruled that a 16-year-old self-proclaimed medium and his friend had committed suicide by jumping from a ninth-storey flat last year.

They were convinced the world was ending and they would be resurrected as demon slayers, local media said.

The Straits Times newspaper reported this week that the local Taoist Federation was planning to launch a voluntary registry of dangkees operating in some 300 temples, with the possibility of a licensing scheme in the future.

It quoted the federation's president Tan Thiam Lye as saying that some self-styled dangkees were driven by personal gain, and a manual to help devotees select mediums will be issued by the group.

Tay, who since the age of 16 has been a dangkee of Fa Zhu Gong, a Taoist deity believed to be in charge of policing demons and rescuing people, said the young medium who killed himself had "let his imagination get the better of him."

"He had gone spiritually astray, and lost control of himself," Tay said.

His family said the most extreme act Tay had ever done when he was possessed was to have his wrists pierced with needles, but even then, they did not bat an eyelid and the wound healed afterwards.

"I don't think it's anything much... I'm used to seeing him in trances, I've been seeing him do this since I was small till now," said Tay's wife and childhood friend, Goh Gek Muay.

An AFP reporter who witnessed one of Tay's rituals saw him writing advice for worshippers with a brush on tiny slips of paper while apparently in a trance.

Being a dangkee is not hereditary and practitioners believe the gods pick their own proxies.

Taoist beliefs are very closely linked to animism as well as ancestor and deity worship, with followers abiding by the central concept of "dao", which is to attain heaven by living in harmony with nature and observing moral values.

Tay believes his deity Fa Zhu Gong has blessed him and his family with a peaceful life in return for his services.

Taoists constitute only 8.5 percent of the predominantly ethnic Chinese population, according to the last full census done in 2000, but their beliefs are deep and strong.

However, Tay is not a Taoist hardliner and believes the dangkee system is part of a universal belief in good over evil.

"All religions are the same, no matter what they preach, they all will ask you to do good in the end. Ultimately, it's up to the individual. If he does good, he will reap rewards."

Love Offerings For The Dead Could Be Dying Out In Singapore

Religious worship attendance is associated with a decreased risk of suicide attempts.