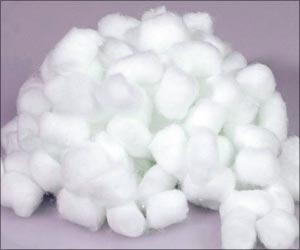 Wild finches in the Galapagos Islands used cotton balls, treated with mild pesticides and set out by biologists of University of Utah, to help build their nests. The mild pesticide killed parasitic fly maggots and protected baby birds. The researchers say the self-fumigation method may help endangered birds and even some mammals.

"We are trying to help birds help themselves," says biology professor Dale Clayton, senior author of a study outlining the new technique. The findings were published online May 5, 2014, in the journal Current Biology.

"Self-fumigation is important because there currently are no other methods to control this parasite," blood-sucking maggots of the nest fly Philornis downsi, says University of Utah biology doctoral student Sarah Knutie, the study's first author.


Clayton says the parasitic nest fly may have invaded Ecuador's Galapagos Islands via ships and boats from the mainland at an unknown time and "showed up in large numbers in the 1990s. So the birds have no history with these flies, which is why they are sitting ducks. From the perspective of the birds, these things are from Mars."
Advertisement
Knutie says the flies now infest all land birds there, including most of the 14 species of Darwin's finches, two of which are endangered: fewer than 100 mangrove finches remain on Isabela Island, and only about 1,620 medium tree finches exist, all on Floreana Island. Nest flies have been implicated in population declines of Darwin's finches, including the two endangered species.

Clayton says the pesticide - permethrin - is safe for the birds: "It might kill a few other insects in the nest. This is the same stuff in head-lice shampoo you put on your kid. Permethrin is safe. No toxicologist is going to argue with that. The more interesting question is whether the flies will evolve resistance, as human head lice have done."

Clayton believes that will not happen if treated cotton is placed only in the habitats of endangered finches, not others.

Can Other Species Fumigate Themselves?

Knutie and Clayton say their method might help the endangered mangrove finches, with only 60 cotton dispensers needed to cover the less than half a square mile inhabited by the birds on Isabela Island. So scientists there recently started a preliminary experiment to determine if mangrove finches will collect cotton balls from dispensers.

Florida Endangered by Sea Level Rise
Miami, south Florida, is known for its warm sunshine and sandy beaches, and is a haven for ......

Fertility Clinic to Breed Endangered Coral, Coming Soon
A plan to create a fertility clinic in order to breed endangered coral has been launched by ......

Syria's 6 Heritage Sites Listed as 'Endangered'
Six ancient sites in Syria have been added to the endangered World Heritage list by the UNESCO...