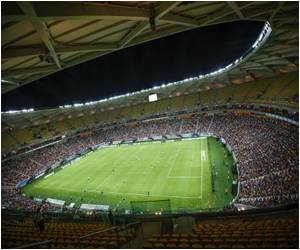 A security force of 170,000 is to be deployed by Brazil for the World Cup to deter hooligans from home and abroad.

Despite the efforts of the government to limit the price gouging, the hotels in Rio where the World Cup is scheduled has hiked the rates exorbitantly
Advertisement

The threat of hardline fans from across the border in Argentina or flying in from England and other European nations has accentuated the sense of urgency.


Some 1,800 private security guards have been assigned to each of the 12 World Cup stadiums. About 700 federal agents will also be drafted in if needed, officials said.

Gains With the Cup Forecast in Brazil: Study

Brazil will get a major shot in the arm with the World Cup related spending, tripling a a $4.2 billion contribution to the economy made at last year's Confederations Cup, says a study.
Advertisement
Organizers are also deploying banks of cameras, X-ray machines and metal detectors to keep potentially dangerous items out of stadiums.

They have already banned the "caixirola," a trumpet-like instrument the government had promoted as Brazil's answer to the vuvuzela, the horn that created a noisy stir at the 2010 World Cup in South Africa.

Some fans threw caixirola onto the pitch during test games last year. Authorities decided it was too risky and banned the trumpet as a potential weapon.

The security clampdown starts at Brazil's borders. The government has held intelligence exchanges with Argentina, England and other countries over known hooligans.

"We have struck agreements through FIFA. The objective is to stop them (violent fans) from getting here and then, if they do, to keep them from entering the stadiums," said President Dilma Rousseff.

Tens of thousands of Argentine fans are expected to cross the border to support their two-time champions.

Hardcore Argentine fans, known as "barras bravas", were involved in incidents at the 1986 World Cup in Mexico, in France in 1998 and in South Africa four years ago. A number were expelled.

The Argentinian government has provided a list of known trouble-makers. But Brazilian authorities acknowledge that they cannot keep all troublemakers away from the tournament.

At last year's Confederations Cup, a World Cup rehearsal, stadium problems were minor. But mass protests in the streets turned violent and took the government by surprise.

Police had to disperse more than a million people protesting against the multi-billion dollar cost of the World Cup and the 2016 Rio Olympics. There is widespread anger over the state of Brazil's infrastructure and public services.

A toilet bowl hurled by one hooligan in the World Cup city of Recife four weeks ago killed one person. In February, one fan died after being savagely beaten in Sao Paulo.

Last year, there were clashes between supporters in the southern city of Joinville. And Corinthians fans invaded the Sao Paulo club's training base in February and attacked players.

Security trials have been held at the 12 venues in recent months using domestic matches or continental tournaments such as the Copa Libertadores.

"We have not registered any serious incidents (at test events) since the Confederations Cup," Hilario Medeiros, head of security for the World Cup organizing committee, told AFP.

But the World Cup will feature 32 teams and not just eight as last year, when Brazil's fierce rivals Argentina did not compete.

Brazilian authorities say they are leaving nothing to chance however.

Stewards will be first to intervene in a stadium if tensions mount.

"If that doesn't sort it out then the police will step in and if necessary forces and tactical groups will provide wider response," Andrei Rodrigues, justice ministry secretary for major events, told AFP.

Police will patrol around all stadiums.

At FIFA's behest, fans will be kept away from training sessions. But after protests were made, Brazil are pondering allowing special access to 10 to 15 fans at a time.

Dengue fever alert was raised on Thursday by authorities in Paraguay while the World Cup is underway next month in neighbouring Brazil, where the mosquito-born illness is rampant in some regions.
Advertisement
<< Panama Saves Whales, Protects World Trade
Deception Caused Athletes to Improve Performance: Study >>

Here is the Official Condom for World Cup

World Cup 2014 Football Injuries
News Archive
News Resource
Advertisement
News Category
How to Reduce Needle Anxiety in Children? Tobacco Addiction: Here's How to Break the Habit Parents are 'Winging It' on Their Kids' Mobile Use Ankle and Ankle Movements While Riding an Hoverboard Is It Healthy to Let Your Mind Wander?
More News
Sign up for Wellness Consult a Doctor Sign up for Selfcare

Indian Medical Journals Find a Hospital A-Z Drug Brands in India Diaphragmatic Hernia Post-Nasal Drip Selfie Addiction Calculator Drug Interaction Checker Noscaphene (Noscapine) Find a Doctor Blood Donation - Recipients
This site uses cookies to deliver our services. By using our site, you acknowledge that you have read and understand our Cookie Policy, Privacy Policy, and our Terms of Use