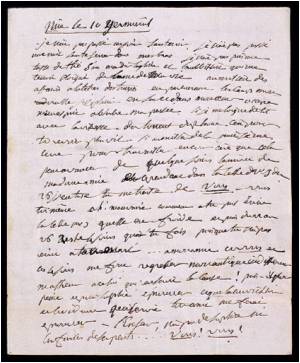 For the first time, a new digital technology has enabled people to see the previously unseen passages from Charles Dickens' manuscripts.

The technique, which removes his crossings-out and corrections, allows researchers to discover how the author shaped and reshaped his prose.

Was Oliver Twist Really Starved as was Portrayed by Charles Dickens?

Experts delve into the truth behind the famous gruel which was served to children in the Victorian workhouse, and feel it might not have been as bad as what was portrayed by Charles Dickens.
Advertisement

The Victoria and Albert Museum pilot study focused on his Christmas story, 'The Chimes', using technology that was developed by Ian Christie-Miller, a former visiting research fellow at London University.


Although no dramatic revelations surfaced from deletions in that short story, scholars are excited by the technology's potential on novels such as 'Bleak House'.

Charles Dickens developed a ritualistic routine in his domestic life, together with an obsessive approach to work, which is consistent with obsessive compulsive disorder (OCD).
Advertisement
"We're talking of tens of thousands of manuscript pages that could potentially be unlocked," the Independent quoted Florian Schweizer, director of the Charles Dickens Museum in London, as saying.

The technique, separating layers of text, involves combining two or more digital images - a frontlit and backlit image of a page.

By digitally subtracting one from the other, differences are easily revealed.

"Why did he make that change? Quite a change. Literary scholars will ask themselves those questions," Dr Schweizer said.

Rowan Watson, a senior curator at the V and A, described Dr Christie-Miller's technology as "ingenious and inspiring".

The manuscripts show Dickens "almost thinking aloud on to paper," he added.

'Brief Attention Span' in Kids These Days, Due to Inability to Read Dickens

Claire Tomalin, the acclaimed biographer of Charles Dickens claims that nowadays children lack the required attention span to read the author's classic, although lengthy books.
Advertisement
<< Identification Of Culprit Behind Chemotherapy Resistance in...
Don't Want to Be Tagged As a 'Psychopath'? Have a Facebook A... >>