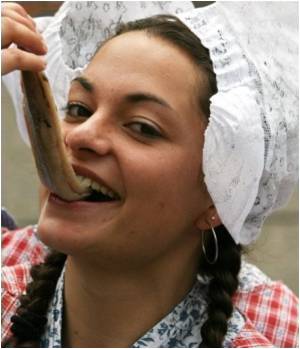 Researchers at the University of California, San Diego School of Medicine have discovered why eating fish may be a great idea to ward off chronic inflammation and insulin resistance.

Obese fat tissue contains lots of these macrophages producing lots of cytokines, which cause inflammation and rising insulin resistance.


Olefsky and colleagues eventually narrowed their focus to a G-protein receptor called GPR120, which is found only on pro-inflammatory macrophages in mature fat cells. When the receptor is exposed to omega-3 fatty acids, it is activated and generates a strong anti-inflammatory effect.

Diabetes has replaced every other condition to become the fastest growing lifestyle disease, globally. This disease also impacts children. Some people are more inclined to develop diabetes than others. Do you belong to the high- risk group? Spend 5 minutes to find out.
Advertisement
"The omega-3 fatty acids switch on the receptor, killing the inflammatory response," said Olefsky

"Our work shows how fish oils safely do this, and suggests a possible way to treating the serious problems of inflammation in obesity and in conditions like diabetes, cancer and cardiovascular disease through simple dietary supplementation," he added.

However, it's not clear how much fish oil constitutes a safe, effective dose. If too high, it could up the risk of to increased risk of bleeding and stroke in some people.

The study is published in the September 3 issue of the journal Cell.

Almost one-third of the people are unaware of the risk factors of diabetes. Find out if you run the risk of diabetes by using Diabetes Risk Assessment calculator.
Advertisement
Advertisement