Search for Remains of 'Quixote' Author Narrowed Down 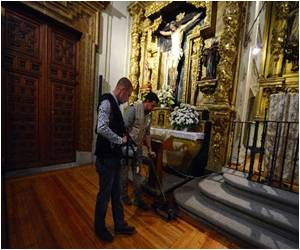 Five spots in a Madrid church have been identified where the remains of Spanish writer Miguel de Cervantes, the author of "Don Quixote" may lie, researchers said Monday.

Scientists used infrared cameras, 3D scanners and a ground-penetrating radar to pinpoint the five areas at the church of the Convent of the Barefoot Trinitarians where human remains may be found, said forensic anthropologist Francisco Etxeberria who is leading the search.
Advertisement

They will now search these locations for bones, starting in the crypt which appeared to have about 30 alcoves where bones could be stored, he told a news conference.


"It is like a patient who is going to have surgery. Doctors must take X-rays first," said Etxeberria, who participated in the autopsy that confirmed the suicide of former Chilean president Salvador Allende.
Advertisement
Cervantes is recorded as having been buried in the church a day after his death on April 22, 1616 -- the same week that William Shakespeare died.

He died a poor man but had strong links with the Trinitarian religious order which negotiated his release and helped pay a ransom after he was captured by pirates.

The church has been expanded over the centuries, however, and the exact whereabouts of the writer's remains have been forgotten.

The researchers will look for bones in the crypt first because it had a larger number of alcoves than had previously been thought and there is a greater chance that Cervantes' remains could be found there, Etxeberria said.

"It is reasonable to think that if Miguel de Cervantes' remains where exhumed because of any works that were carried out in the church, they would have been deposited in one of these alcoves, just like any other bones that were found in the subsoil," he said.

"We don't want to generate false hopes. I don't know if we are going to find him."

Madrid mayor Ana Botella told the news conference that the city would finance this next phase in the search.

Etxeberria's team launched what is the first significant search for the remains of the greatest writer of the Spanish Golden Age at the end of April.

If human bones are found in the church, forensic scientists will rely on the author's specific physical characteristics as documented in portraits or his own stories to identify his remains.

Cervantes received three musket shots, two in the chest and one in his left hand, during a 1571 naval conflict, the Battle of Lepanto, in which the Holy League led by Spain defeated the Ottoman fleet.

The shooting caused him to lose the use of his hand and is believed to have left marks on his bones.

There was no timeline for when scientist would start looking for bones in the church although forensic identification could be completed this year, said Terrietia, who has worked on more than 100 exhumations of graves from the Spanish Civil War.

"We are talking about a universal figure, we want to do things without any rush, seriously," he said.

If Cervantes's remains are identified, it is planned that he remain buried in the convent, which is still inhabited by nuns and has been designated part of Madrid's cultural heritage since 1921.

Born near Madrid in 1547, Cervantes has been dubbed the father of the modern novel for "The Ingenious Gentleman Don Quixote of La Mancha", published in two parts in 1605 and 1615.

His works have had a huge influence on authors, painters and composers down the centuries.

Remains of 'Quixote' Author Cervantes Hunted by Spain
A radar-assisted hunt was launched by scientists in a Madrid convent on Monday for the remains of .....

Life of Spain's Eight-Year-Old Queen-To-Be
Like other 8-year-old girls, she eats in the school canteen and goes to ballet class. Her friends .....

Russian Art Museum Plans Branch in Spain
Paintings and gold icons from Russia's art museums will be now placed in an old tobacco factory in ....