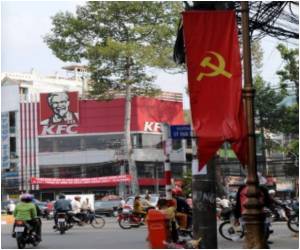 The growing popularity of Western junk food is fuelling a diabetes boom across Southeast Asia, Australian researchers warned on Wednesday.

Studies found about 11 percent of men and 12 percent of women in Vietnam's Ho Chi Minh City had type 2 diabetes without knowing it, on top of the four percent of people who are diagnosed sufferers.

Learn more about Type 2 Diabetes, a disease that is taking the world by storm!
Advertisement

"Dietary patterns have been changing dramatically in Vietnam in recent years, particularly in the cities as they become more Westernised," said Tuan Nguyen of Sydney's Garvan Institute of Medical Research.


"There are fast food outlets everywhere."

He said the findings, based on testing a random sample of 721 men and 1,421 women, mirrored the results of a similar study carried out in Thailand.

Almost one-third of the people are unaware of the risk factors of diabetes. Find out if you run the risk of diabetes by using Diabetes Risk Assessment calculator.
Advertisement
"Because of that, we feel very confident that we can extrapolate our findings to other parts of Southeast Asia including Malaysia, Singapore, Cambodia and Laos," he said.

Type 2, the most common form of diabetes, is caused by high levels of fat and sugar in the diet and a lack of exercise, and can lead to heart disease, vision loss, limb amputation and kidney failure.

Co-author Lesley Campbell said developing countries were facing a "sad story" where they are affected by Western lifestyle diseases alongside hunger and poverty, but without the health resources to treat them.

"Unfortunately, we are watching, in just over a generation, a very rapid increase in diabetes" in developing nations, she said.

The researchers have developed a simple risk assessment for diabetes, using only blood pressure and waist-to-hip ratio, which they hope will help doctors detect those most likely to have the disease.

Source: AFP
Advertisement
<< Ronaldo Sought the Services of an American Surrogate to Hav...
Brothels Use Cow Steroids to Fatten Up Underage Sex Workers... >>