Scientists Say Nanoparticles in Sunscreens Could be Toxic If Accidentally Eaten 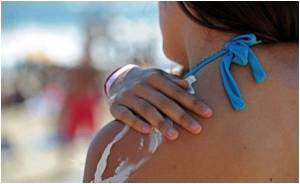 Scientists have said that nanoparticles in sunscreens could be toxic if accidentally eaten.

Philip Moos and colleagues have said that particle size affects the toxicity of zinc oxide, a material widely used in sunscreens.


Solid zinc oxide was more toxic than equivalent amounts of soluble zinc, and direct particle to cell contact was required to cause cell death.

The researchers noted that there is ongoing concern about the potential toxicity of nanoparticles of various materials, which may have different physical and chemical properties than larger particles.

Cervical cancer is the second most common cancer among women and is the primary cause of cancer-related deaths in developing countries
Advertisement
Barely 1/50,000 the width of a human hair, nanoparticles are used in foods, cosmetics and other consumer products. Some sunscreens contain nanoparticles of zinc oxide.

"Unintended exposure to nano-sized zinc oxide from children accidentally eating sunscreen products is a typical public concern, motivating the study of the effects of nanomaterials in the colon," noted the scientists.

Their experiments with cell cultures of colon cells compared the effects of zinc oxide nanoparticles to zinc oxide sold as a conventional powder.

They found that the nanoparticles were twice as toxic to the cells as the larger particles.

Although the nominal particle size was 1,000 times larger, the conventional zinc oxide contained a wide range of particle sizes and included material small enough to be considered as nanoparticles.

The concentration of nanoparticles that was toxic to the colon cells was equivalent to eating 2 grams of sunscreen - about 0.1 ounce.

This study used isolated cells to study biochemical effects and did not consider the changes to particles during passage through the digestive tract.

The scientists say that further research should be done to determine whether zinc nanoparticle toxicity occurs in laboratory animals and people.

The study is in ACS' Chemical Research in Toxicology, a monthly journal.

Cancer of the Endometrium, or the inner lining of the uterus (womb) is called endometrial cancer.
Advertisement
Advertisement

Wrinkling is definitely age-related but there are some factors that should be kept in mind to delay this ...
This site uses cookies to deliver our services.By using our site, you acknowledge that you have read and understand our Cookie Policy, Privacy Policy, and our Terms of Use  Ok, Got it. Close
×