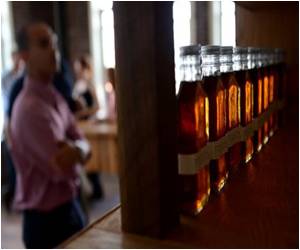 Scientists have identified that a single whiskey sample contains hundreds of nonvolatile compounds.

Added up across multiple samples, the number of compounds comes to about 4,000 total, a scientific testament to the complex molecular mingling that occurs as a spirit ages, sometimes for decades, in a 53-gallon oak barrel.

Of the thousands of compounds in the resulting products, the scientists narrowed the field down to 50 to 100 contributors, including fatty acids, alcohols and tannins, comprising a spirit's signature that distinguishes a Tennessee whiskey from bourbon.

Pappy Van Winkle is the Most Searched Whiskey Brand in the US
The Huffington Post has come out with a list of most popular whiskey labels searched by Americans .....